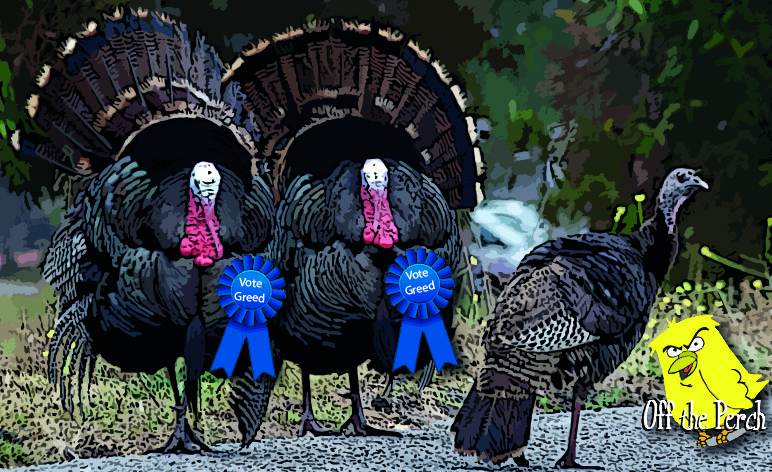 The Turkeys For Christmas campaign has endorsed Conservative leader Theresa May in the UK general election. The coalition of turkeys in favour of self-slaughter for the sake of Christmas dinner says that May is their number one candidate to lead Britain.

The spokesturkey for the campaign group, Justin Thyme, told Off The Perch:

There is only one way for young, old, sick, disabled, in-work, out-of-work voters to go today. Go blue. Vote Theresa May.

When asked why the group favoured the Conservatives over Labour, Thyme answered:

It’s simple. May is the only leader brave enough to say no. She has steadfastly refused to do anything to help anyone not rich enough to buy their own island. And despite enormous pressure to do so. That’s real leadership. Unwavering.

Off The Perch asked why a group of turkeys would support the eating of turkeys at Christmas. Would this not mean you getting killed, plucked, roasted, and eaten?

‘Oh, of course not,’ Thyme replied. ‘Not us. We don’t mean turkeys like us. No, we’re all fine. We mean the other turkeys.’

At this point in the interview, a fellow turkey whispered in Thyme’s ear. The spokesturkey’s coxcomb turned white, and he gasped:

They’re going to eat US?!

Off The Perch sought to clarify if this would change the turkeys’ position on Christmas or Theresa May, but he flapped away too fast. Our team attempted to follow-up with a phone interview, but the campaign’s telephone number is now disconnected and the campaign henhouse shuttered.