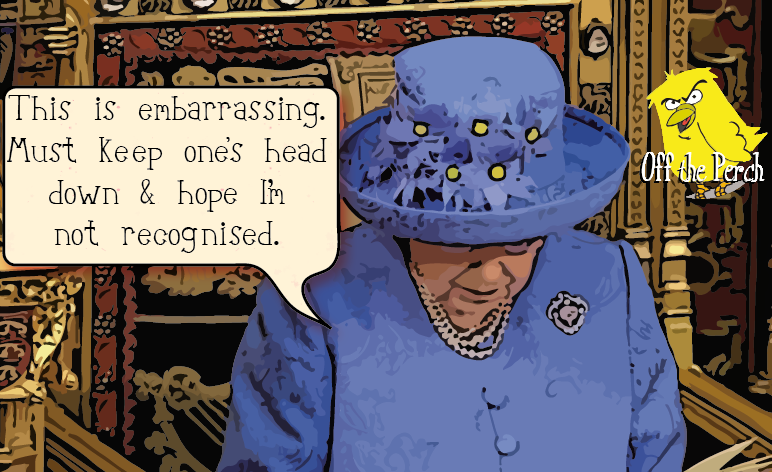 After several delays, the Queen’s speech has taken place. But all was not as it should be. As a clearly ‘not amused’ Queen gave the impression that she wasn’t signing in a ‘government’ so much as a ‘govermess’.

The Queen turned up to her speech wearing a shell suit and smoking a roll-up cigarette.

“Are you filming?” the Queen asked a cameraman, as she flicked her fag into a bin full of Tory manifestos. “Because one is due down the bingo in 20 minutes”.

The Queen was informed that the cameras were indeed rolling, and so she had a go at the speech:

There seem to be several pages missing? Had trouble running some of these ideas past the public, did we? Well, let’s see what else you’ve got.

Okay, so it says here that you want to carry on making things… ‘better’… for ordinary people… Is that a typo? No? So it shouldn’t say ‘worse’ then?

Well I must say that you people have an inflated opinion of yourselves. And that’s coming from a woman whose face is on the £50 note!

What else is in here? Okay, so it says that you’ve cancelled my speech next year. What a shame. I was really looking forward to serving up whatever dog’s dinner you had on the 2018 menu. Maybe you could go into coalition with Foot and Mouth disease, or elect the woman who put a cat in a bin as your new leader?

The job complete, her Majesty proceeded to light another cigarette, shake her head at Theresa May, and then ride off to Mecca Bingo on her royal ostrich.