'No need for a second election because Corbyn’s already calling the shots,' PM confirms - Canary 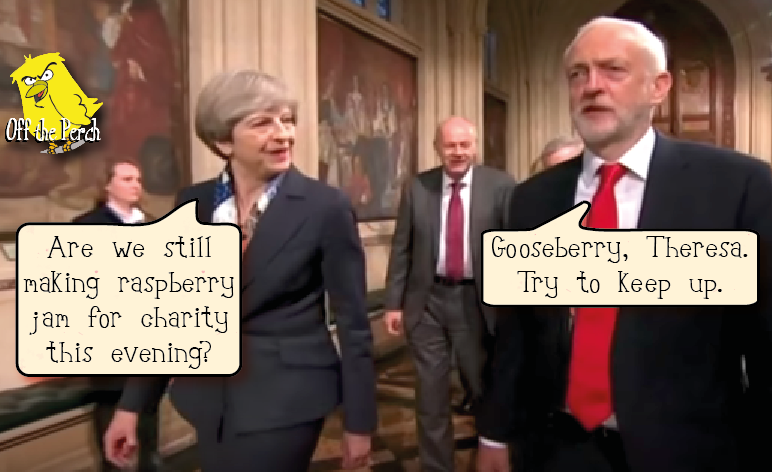 Many people have expected a second election to happen in 2017. Or at least in 2018 anyway. Because if not 2018, then that will be the first year since 2013 that we’ve not had a game-changing election or referendum. And we wouldn’t want to go more than 12 months without the sky falling in, would we?

Theresa May, however, has confirmed that a second election is unnecessary. Largely because Jeremy Corbyn is already calling the shots:

Talk that some Tory MPs will abstain on Labour's vote to end public sector pay: they are tired of being beaten up by nurses, teachers, docs

May also confirmed that she will be shadowing Corbyn until such a time that she works out how to do government.

Off The Perch went to the HQ of British government. Which is no longer 10 Downing Street, but actually Jeremy Corbyn’s allotment. A scene where the leader of the country was teaching Theresa May about things like compassion, leadership, and wheel barrow maintenance.

“I just dug where you asked me, Jeremy, and I found a load of potatoes!” May said. “Under the ground!”

A kind yet amused Corbyn looked on.

“Where did you think vegetables came from, Theresa?”

“Well, I’d heard the rumours. But I thought it was one of those funny working-class jokes. You know, like the North of England. That’s why I struggled eating those chips.”

Corbyn explained that vegetables – and indeed most things – were harvested or produced by working people via a process called ‘hard graft’.

“Is that how it works?” May asked. “You know, I suspected all these working-class types were layabouts. Now that I’ve tried a bit of this work myself, though, I can see that it’s actually quite tiring. And I’m thinking that, rather than trying to make working people’s lives worse, we could actually make them better?”

The benevolent Buddha of the allotments smiled knowingly.

“That’s lesson one, Theresa,” Corbyn said. “Next, I’ll teach you why selling arms to hostile foreign powers may be financially lucrative, but the cost against our collective conscience is simply not worth the price.”

“And what’s after that?” May asked.

“Then, we’ll be running a jumble sale for abandoned parrots,” Corbyn said wisely.

And then, the greying sage and his apprentice went off to run the country/make jam/smash neoliberalism.