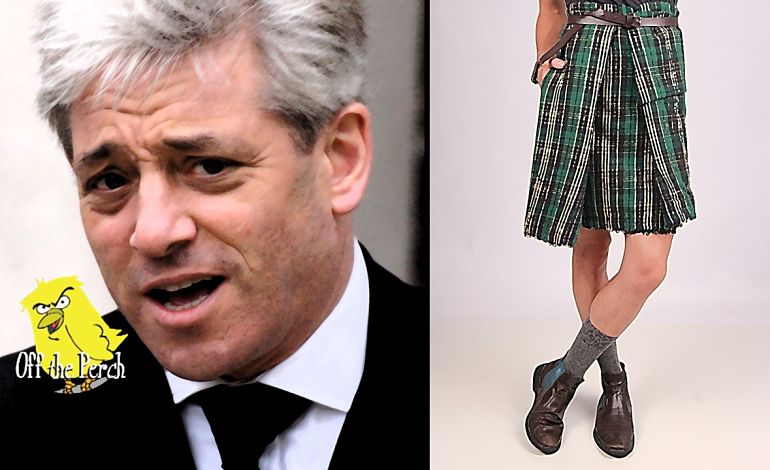 In a move which is bound to infuriate traditionalists, Commons Speaker John Bercow has torn up the dress code. Male MPs can now go tieless. What’s more, such open-necked honourable gentlemen will even be allowed to speak. This has dismayed some members who’ve previously relied on elaborate neckwear as a substitute for personality.

But Off The Perch understands that Bercow has gone a step further. During the recent hot spell, a backbencher apparently turned up for a debate clad in Bermuda shorts and flip flops. Bercow went absolutely ballistic, although this may have been because his gowns and ceremonial regalia were making him overheat. The hapless member scuttled away, ditched the flip flops, and swapped his flappy shorts for a business skirt nicked from the ladies’ cloakroom. Nobody noticed at first, but when it was brought to the Speaker’s attention he said he was fine with it.

Referring to the precedent of the nation’s schoolchildren, Bercow said that while shorts were clearly “an affront to all right-thinking people”, skirts formed a long-established part of “business attire”. He clarified that kilts would also be permitted “under diversity legislation”. An Off The Perch straw poll, conducted quite late at night in 13 different bars throughout Westminster, discovered that an astonishing 93% of male MPs are “actively considering” wearing a skirt to work.

To get the public view on this seismic development, Off The Perch spoke to floating voter Terry Chestnuts:

I don’t give a tuppenny tit what MPs wear. I’m more bothered by what they say and do. Mhairi Black’s done more than most of them to make the Parliament channel watchable and I can’t recall seeing her in a tie. If it takes male MPs wearing skirts to stop parliament being so up itself and inaccessible then I’m all for it.