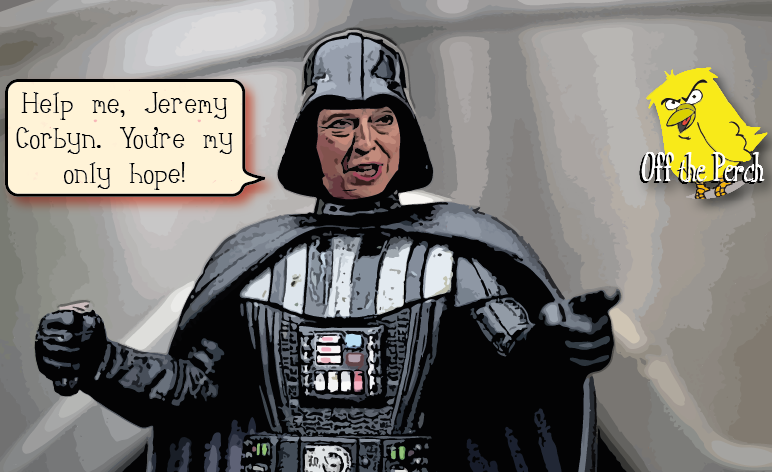 Against all the odds, Jeremy Corbyn’s plucky Rebel Alliance managed to blow up Darth May’s Death Star earlier this summer. And although the Empire was left intact, it was still a massive blow. Especially as the Death Star was supposed to blow things up – not get blown up itself! A Death Star which no one forced the Empire to build in the first place.

But Darth May has come up with an unusual plan to make up for the loss of her primo space weapon. A plan which we should all have a bad feeling about.

Corbyn was practicing his lightsaber skills one day when his trusty droids, C3-PLP and R2-John McDonnell, brought him a holographic message from Darth May:

It’s come to our attention that, actually, your lot are quite popular. As such, we were wondering if you’d give us a bit of credibility and help us run the Empire?

Obviously, we still want to rule with an iron fist, but we’re thinking that if we use your hand instead of ours, then people might think you’re a load of nerf-herders too. Just like we did with the Liberal Wookiecrats.

Anyway, get back in touch soon. I promised Branson the Hutt a pretty sweet tax deal, and if I can’t follow through on that he’s going to feed me to his rancor.

Corbyn was confused by the request, as obviously the Rebel Alliance is popular precisely because it’s not the Galactic Empire. And while an intergalactic coalition might be good for a few space bucks, it would ultimately play as badly as Star Tories: Episode 1 – The Cameron Menace.

The other problem Darth May is having is that she didn’t run the plan past her boss – Emperor Rupert Murdoch. Which is why the shriveled old sith wants to replace her with either Kylo Michael Gove or Jar-Jar Boris Johnson.

Who are both incredibly unpopular, of course. But at least they’re not asking the opposition to rule the galaxy for them.