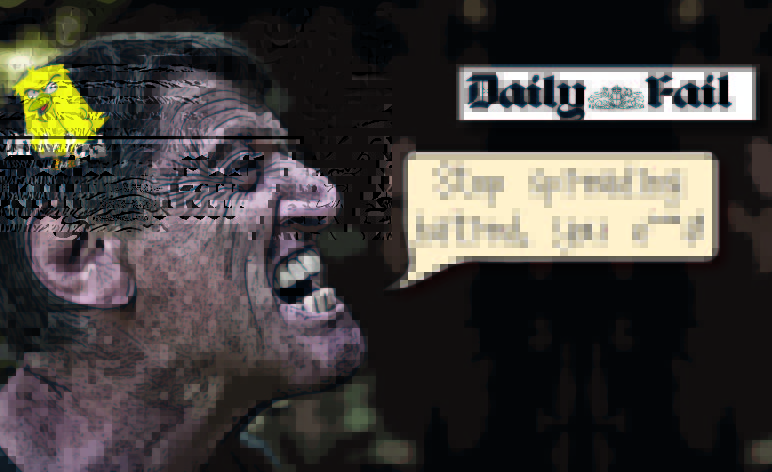 And yet that abuse is there. Coming in from all sides. Invading public discourse like black mould seeping into a poorly maintained bedsit.

A source speaking out on behalf of the abused, though, is actually one of the UK’s most prominent serial abusers. Said abuser, of course, being The Daily Mail. An abuser that I will now lightly abuse myself. Albeit in a classy way. Using things like satire and irony – as opposed to the more straightforward language that’s used in the Mail Online’s comment section:

STORM IN A WOODPILE: Fury as Tory MP is subjected to PC outrage for using a common term that most people say all the time, apparently. pic.twitter.com/O2Gl177wrv

A comment section that the hatred-hating writers at The Mail have presumably never actually read. Because obviously, they’d be mortified to discover the shocking scale of abuse that lurks beneath every one of their articles:

The latest Mail editorial* on the issue reads:

The abuse in this country has reached intolerable levels! And all because we have allowed our country to become infested with bestial guttersnipes who have more in common with the average rat than you or I!

These foul, malodorous pukebags infest every last area of this country! And they are legion. Making up 48% of the country if the Brexit referendum is anything to go by!

Most of them are feckless, drug-addled, pansy extremists! The rest tend to be nurses, firefighters, or teachers! Which seems like a perfectly nice thing to be – BUT THEY ARE JUST VIRTUE SIGNALLING! They only entered those professions so that you would think they are nice! Which explains why they’re so OBSESSED WITH MONEY! Always asking to be paid a FAIR AMOUNT!

The diatribe continued in that fashion for several more pages. Eventually reaching a point at which it wasn’t even words anymore – just graphic drawings of terrible atrocities with love hearts surrounding them.

A diatribe which was actually the most balanced thing they’ve written in ages.