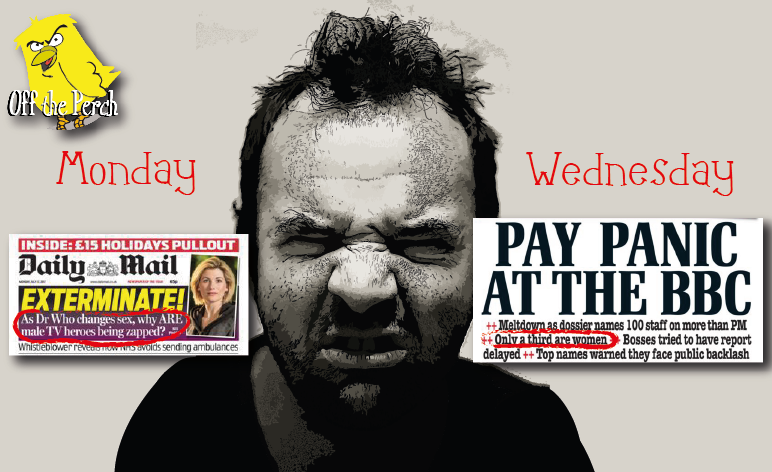 What a week it’s been for The Daily Mail!

A week in which they seem to have gone full circle, and are now complaining that women aren’t getting a fair crack of the whip!

And also that wages for elites in the UK are too high!

What a time to be alive!

Off The Perch caught up with The Mail’s Editor, Paul Dacre (PD), to find out more:

OTP: So Paul, could you explain your sudden change of heart?

*A COMMENT WHICH WAS ACCOMPANIED BY A TORRENT OF ANGRY SPITTLE*

OTP: OK! So do you think that other industries should be made to enforce gender equality? Do you think there should be a maximum wage? In banking, for example?

PD: DON’T BE BLOODY STUPID! THE BBC IS A PUBLIC INSTITUTION!

OTP: Aren’t some banks semi-public though, since 2008?

PD: BECAUSE I’M NOT FRIENDS WITH ANYONE AT THE B-BLOODY-C!

Unfortunately, Mr Dacre lost his temper at that point. Which was a shame, as it meant we couldn’t ask him how much he earns himself.

Please can someone remind me what Paul Dacre earns before the inevitable frothing from Mail? pic.twitter.com/q4giTmbSqM

The issue does obviously raise some tough questions for socialists.

Obviously, we understand that the BBC has to pay competitive wages to attract talent like… Chris Evans… But it’s exactly the sort of aggressive capitalism we’re against.

Although, to be fair, having Chris Evans earning that much does do more to discredit the idea that capitalism rewards merit more than a million opinion pieces on the subject ever could.

And, of course, all these issues too:

1. Gender £ gap
2. No BAME anywhere near big £
3. Industrial scale Nepotism
4. No performance benchmarks for anyone.

The important thing to always keep in mind, though, is that if The Daily Mail sounds like it’s making a good point, it’s almost certainly up to something.