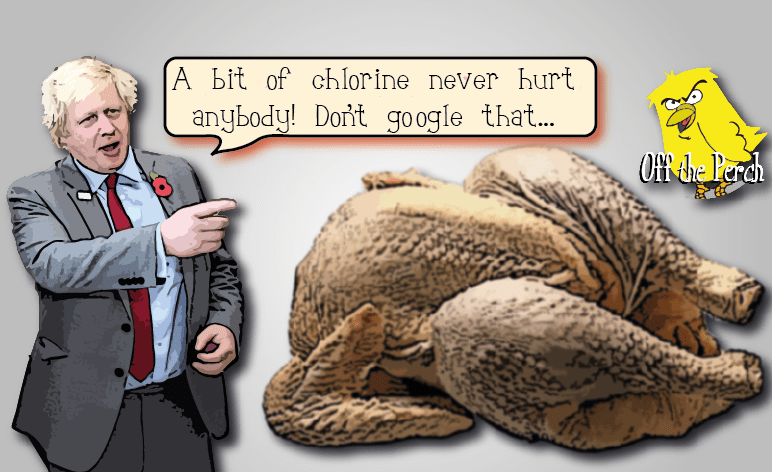 When asked exactly what it is the Brexiteers want to do in a recent interview, Boris Johnson said:

And we want to eat chlorinated chicken.

Chlorine being the same chemical that we’ve historically used to eradicate germs and soldiers.

To which many people who voted Brexit responded:

Things could possibly get worse-r

Obviously, getting rid of all the EU red tape is the aim of the game. But it turns out that some of that tape may actually have been preventing businesses from selling us things like:

Lord of the lies

I’m pretty sure that, when I said we could have our cake and eat it, people understood that what I actually meant was force down our chlorinated chicken and bear it.

When it was put to Johnson that many people definitely didn’t believe that, he said:

Look, if people didn’t realise that I talked giblets by 2016, then that’s their problem! It’s not like I was shy about it!

Johnson then asked to be alone with his dinner. A dinner comprised of rare and endangered birds that he cheerfully explained were rinsed in champagne and plebeian tears.

Because you know that the people making these rules won’t be eating chemically hosed foul, right?