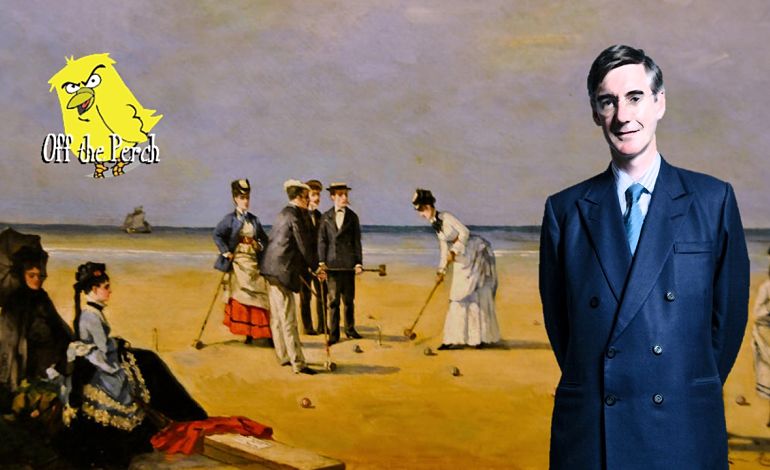 Ludicrous young(ish) fogey Jacob Rees-Mogg has apparently emerged as a front-runner in the Beeb’s annual sport-related contest. The walking time-warp isn’t well known for his sporting achievements, but this doesn’t seem to be holding him back.

Off The Perch is well aware that bookies, rather than pundits, are the ones who know. So we paid a visit to our man with the form, Terry Chestnuts:

Look, yer man Mogg has got two things going for him. First, he’s got a personality. It’s a fuckin’ weird one, I know, but it sticks him way ahead of most of the field. Second, this is the BBC. They can’t get enough of Mogg. I’ve got double carpet on them screening every Have I Got Old News For You with him in it before the Tory Party Conference. Frankly, I’m surprised he’s not on Celebrity MasterChef. Although I suppose it would have been his cook rather than him, wouldn’t it?

But what about the fact that he’s not a sports star?

Yeah, that is a bit of a snag. In the public mind, the closest he gets is playing the stock market and twatting around on Instagram. But then he doesn’t do fuck all on HIGNFY and he still gets invited back. The Beeb loves him.

But anyway, I’ve heard on the grapevine that he might have had some success in the croquet world. Somerset County Finals (Gentry): second place. And that’s a tough competition. Also, he wiped the floor at the House of Commons away day. Stands to reason really. He’s posh as port and in his head it’s basically 1908. Of course he’d be good at croquet. So yeah, services to fuckin’ croquet.

Keen to road-test the idea that Rees-Mogg could be relaunched as a sporting hero, OTP spoke to backbench Tory naysayer Heidi Allen:

It’s true enough that Jacob is a fine croquet player. But I won’t be dialling the number to vote for him. And in fact, if he does win SPOTY, I’ll probably stop watching television. For at least a week.

Off The Perch understands that, if Rees-Mogg does carry off the coveted trophy, he’ll use his even higher profile to demand that all universities drop every subject except Latin, History and Etiquette and raise tuition fees to £25,000 a term. He’s also expected to call for an end to the welfare state, arguing: “Good manners cost nothing”.