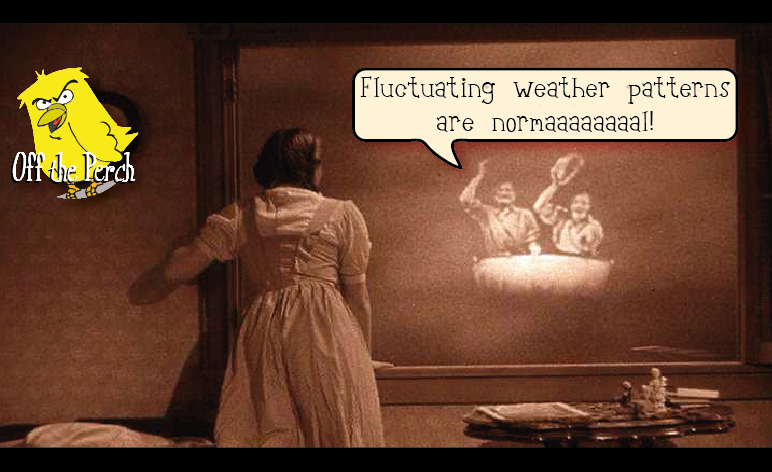 For several decades, scientists have warned that climate change could tear a hole in the Earth-Oz continuum. This would see magical weather tornadoes regularly tearing people into the wonderful world of Oz. An event that traditionally only happened every 30 years or so (i.e. the amount of time it took for Hollywood to run out of new ideas).

Sceptics, however, poo-pooed these claims – saying:

No, no, no! Everything is fine! And I don’t have to listen if I stick my fingers in my ears and go LA-LA-LA!

An argument that they’re sticking to – even though recent weather phenomena mean many of them aren’t in Kansas anymore.

We spoke to the leading moron climate sceptic, Francis Flipknuckle, about the situation:

Well obviously, having our house blown straight out of reality is a bit of an inconvenience, but I don’t really see the link between this and the thing that has long been predicted to cause this.

These things just happen. I mean – obviously, they never used to happen. But just because the climate is changing doesn’t mean that climate change is real.

If anything, this is probably caused by that law Obama passed that means all soldiers have to switch genders and marry one another. My house never got blown to Oz before that!

Our interview was cut short at this point, as Mr Flipknuckle was abducted by a troop of flying monkeys. “This is fine!” he shouted, as they carried him away. “This is normal!”

Of course, it could just be one big coincidence that once-in-a-lifetime weather events are happening twice-in-a-daytime.

And obviously, the only rational thing to do is to wait and see.

…I think I need to reassess the risk management on this.