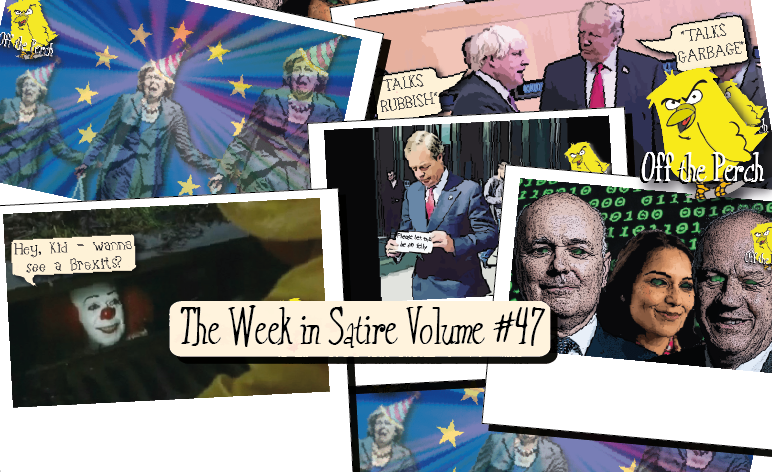 If there’s one thing that most of us can agree on, it’s that you should never crawl into a gutter on the promise of a clown.

Not everyone agrees, though.

And this is how things panned out.

It all floats down here

The UK was wandering past an open sewer when it heard the call of Poundywise the clown:

POUNDYWISE: “Hey, ladies and gentlemen. Wanna come down here and play with my £350m balloons?”

CITIZEN 1: “No thanks. You’re clearly some sort of malevolent, alien entity who’s posing as a clown in order to lure people down to his horror lair. Which is a terrible idea, by the way. If you want to lure people anywhere, the last thing you want to pose as is a clown.”

CITIZEN 1: “He isn’t actually going to give us £350m. He’s just saying that to lure us down to his murder-sewer. If you go down there, he’ll crack you open like a clam and slurp your soul out with his malevolent, alien tongue.”

CITIZEN 2: *SLOWLY CRAWLS INTO THE SEWER* 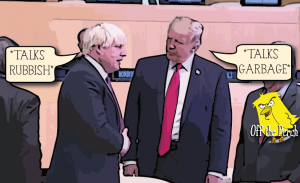 Johnson and Trump finally seen in the same room together

For a long time, people have wondered if Boris Johnson and Donald Trump could actually be the same person. After all, they both:

The conspiracy has been put to bed, anyway, as Johnson and Trump have now been pictured in the same room together. Although the thing about conspiracy theories is that you can’t ‘prove’ them out of existence. Because conspiracy theories aren’t based on truth – they’re based on gut feelings and people having too much time on their hands.

In place of the now discredited theory, several more have sprung into life: 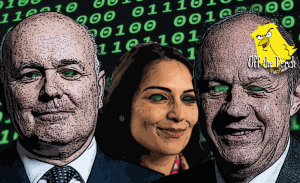 Following the latest terror attack, Theresa May has decided to get tough on internet companies. But unfortunately, it’s not yet possible to create an algorithm smart enough to distinguish between ‘potential terrorism’ and ‘standard Tory policy’.

Department of Woe and Punishment

The worst offender in government is, of course, the Department for Work and Pensions (DWP). A governmental branch that is supposed to be the friend who supports you when you’re in need, but actually functions more like a sadistic vampire who feeds off misery and tedious bureaucracy.

The website for the DWP is just a slow-motion video of the former Work and Pensions Secretary Iain Duncan Smith. Somewhat unusually, a gleeful IDS is topless and rubbing himself in what appears to be goat’s blood. The video plays in both slow motion and reverse, and although he is talking backwards, Duncan Smith can quite clearly be heard saying the word:

In the background, unseen people can be heard screaming.

We asked the advertising creatives who produced the promotional video why they generated such a terrifyingly unsettling piece:

We were asked to make something that embodied what the DWP is all about in under one minute. This was the best we could manage. Although obviously it pales in comparison to what actually goes on. 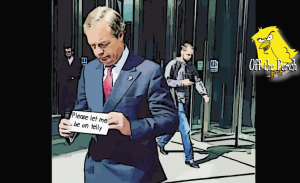 REVEALED: What was inside Farage’s letter to the BBC

On 20 September, Nigel Farage arrived at the BBC brandishing that most fearsome of all weapons… A HAND-WRITTEN LETTER!

But what was written in this letter? Farage claimed he was cancelling his BBC licence fee because of a documentary in which someone suggested his shameless promotion of xenophobia may be partially responsible for the proceeding rise in xenophobia.

Off The Perch has seen the letter, though, and can exclusively confirm otherwise.

I’m sorry about the dramatic delivery, but it’s getting harder and harder to get noticed. I spoke at a far-right rally in Germany the other week, and most people just shrugged and called me a ‘lizard-faced bellend’.

I’m contacting you because I think it’s very important that I’m on TV – now more than ever. The LBC gig is great, but they’ve said that if I keep making stuff up, they’re going to replace me with Morrissey.

Obviously, it’s getting harder to justify putting me on TV. I mean – I’m not leading a political party anymore – and the party I was leading is only still going because our members get a discount at Wetherspoon’s.

I was thinking that maybe I could become a TV personality. As such, I’ve come up with some TV pitches. All of which, I think you’ll agree, are excellent:

Looking forward to hearing back from you. 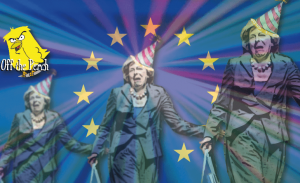 May calls for two year Brexit extension to ‘keep this party going!’

Whether you voted to Remain or Leave, I think we can all agree on one thing: that this period – the period right now – when we still don’t know what Brexit will entail and every day is a confused repeat of the last – is pretty fantastic.

As such, Theresa May has called for a two-year Brexit extension. In her own words to:

We spoke to some people from across the political spectrum to find out what they thought: