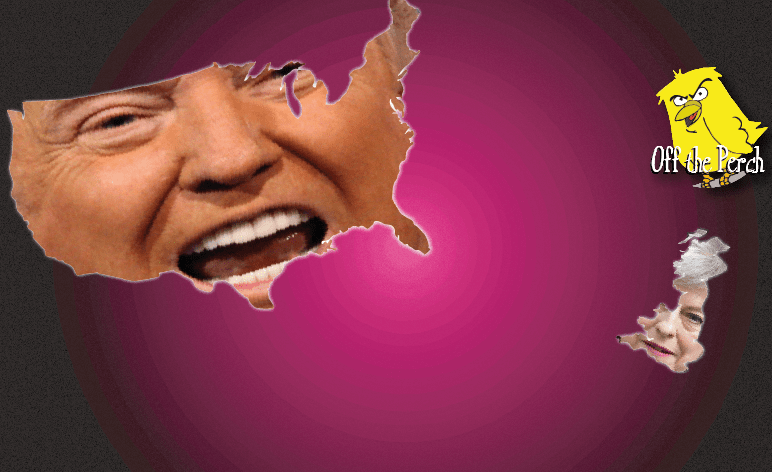 The UK’s hope of a better, post-Brexit trade relationship with the US always seemed optimistic. Especially as Donald Trump’s approach to diplomacy is:

This is why it’s been somewhat predictable that Trump has sided with Boeing over the Northern Ireland-located Bombardier. What’s less predictable is that Theresa ‘U-Turn’ May has threatened a trade war with Donald ‘I WOULD NUKE THE ENTIRE PLANET TO AVOID BACKING DOWN’ Trump.

Trump was relaxing in his Oval Office tire-swing when he heard the news.

“TRADE WAR!?” he screamed – limply beating his chest like an arthritic gorilla. “THOSE LOUSY AUSSIES WANT A TRADE WAR WITH ME!?”

His son-in-law Jared Kushner tried explaining that ‘Aussies’ were in fact the other ones, but Trump wasn’t listening. Instead, he’d jumped on to his tiny tricycle and was frantically pedalling for the war-bunker.

“NUKES!” he screamed at the heads of military. “FETCH ME MY NUKES!”

A giant red button was brought to the President – a button he managed to push after only four attempts.

Once it was done, an apparent ‘live-feed’ showed what was actually the ending of ‘Dr. Strangelove’.

“Won’t he realise it was a fake when Britain is still there tomorrow?” one of the newer generals whispered.

“He hasn’t so far,” a colleague whispered back. “This is the fourth time we’ve ‘nuked’ the UK this week.”

“OOOK!” Trump bellowed at the feed, before grabbing a banana and heading back to his nest.

Although Trump is being prevented from nuking us by his keepers, that doesn’t mean anyone’s preventing him from giving us a shitty deal. Least of all May, who’s spent her tenure as PM proving how little strength and stability she has.

Basically, it’s like we’ve sent the Cowardly Lion to negotiate with King Kong.

Except worse than that.

Because this particular Lion doesn’t have a brain either.