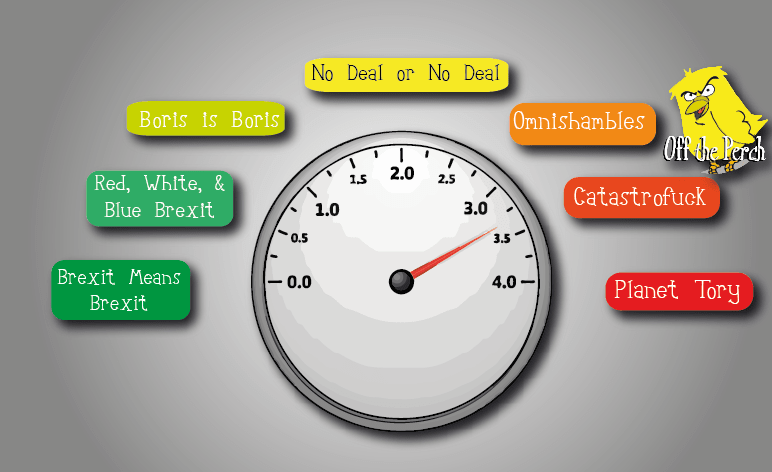 Theresa May is making an emergency trip to Brussels today after raising the Brexit threat level from ‘Omnishambles’ to ‘Catastrofuck’. Speaking to the press before boarding her plane, the Prime Minister claimed that criticism of her handling of Brexit was ‘sour grapes’. Ironic, given she was vomiting the contents of a bottle of Beaujolais over her shoes at the time.

To a new level

May attempted to announce the raised threat level using the government’s new app YourGov. Unfortunately, ‘teething problems’ with the app meant that audio of the Prime Minister recorded automatically as she did so, and was uploaded to the site with the threat level. Users who checked on the threat level this morning were played a 30-second track of what sounded like May weeping, while Brexit Secretary David Davis played My Heart Will Go On on the lute.

In a statement, Downing Street confirmed that the audio was authentic, stating:

We would like to acknowledge the unfortunate teething problems with the YourGov app during this morning’s announcement. We can confirm the Prime Minister was sincerely moved by the Brexit Secretary’s mastery of the lute, and is otherwise well. She looks forward to productive talks in Brussels this afternoon.

But the EU’s Chief Negotiator Michel Barnier poured cold water on the Prime Minister’s hopes. In a terse video statement released during May’s flight to Brussels, Barnier claimed the PM and her team were ‘plein de merde’, which translates loosely to ‘full of shit’.

Sources within the Conservative Party also expressed public dissatisfaction with May’s performance. Off The Perch found a disgruntled Tory sitting untidily on the floor of a Commons bar. He told us:

The Labour Party refused to comment on the matter, saying that to do so would “be like kicking a puppy in the face”.