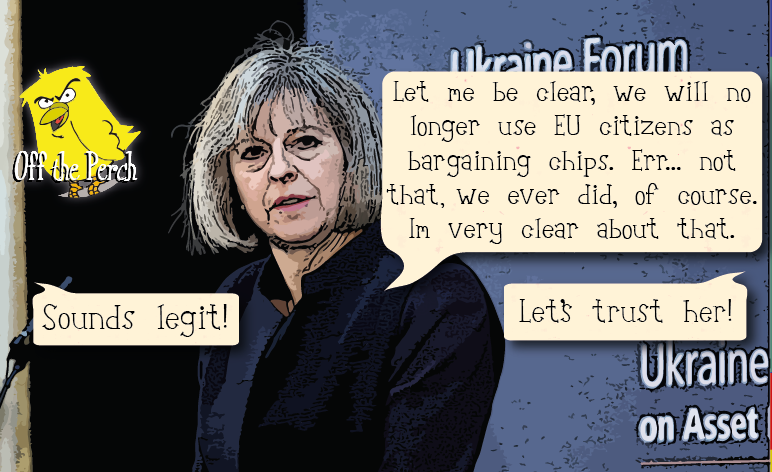 Ever since the UK voted for Brexit, there has been a question of what will happen to EU citizens in the UK. Some say the government has used these people as ‘bargaining chips’. Although the Tories themselves deny this – preferring the terms ‘negotiation pawns’ or ‘haggle pigs’.

All that has changed now, however. As May is calling for “urgency” on the issue of citizens’ rights.

And after the 16 months we’ve just had, you know EU citizens are ready to trust her.

If there is one thing that Theresa May is famous for, it’s sticking to her guns.

Or is it not sticking to her guns?

Regardless of which one it is, you can assume she’ll have switched position on it by this time tomorrow anyway.

This obviously puts her ‘assurances’ in an interesting light for many EU citizens:

“How can we stay knowing that the people in charge treat us so poorly? Today they say we are welcome – tomorrow they’ll be trying to have us liquidised and put in one of your innovative jams.”

“I feel like the only person in a more precarious situation than us is Theresa May herself. Which would be reassuring, if she wasn’t likely to be replaced by someone even worse.”

“Your cheese is excellent, but enough is enough. Good luck everyone who’s stuck here!”

It’s a shame that we will be losing many of the wonderful EU citizens who’ve come to the UK. It’s hard to begrudge them leaving, though. Because let’s face it, most of us have at least one tab open on cheap places to live abroad right now. And a lot of us are wondering how far we could get hitchhiking.