May caught blinking ‘HELP ME!’ in Morse code at Brexit dinner - Canary 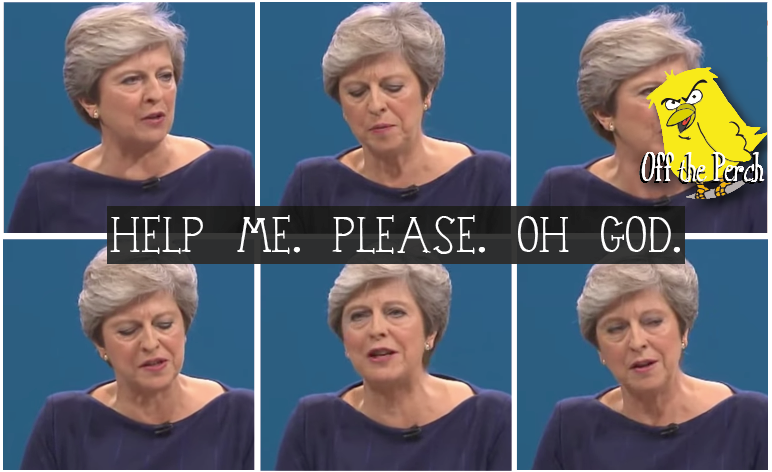 A recent leaked report suggested that Theresa May “begged for help” at a dinner with EU leaders.

This behaviour could just be the tip of the iceberg, though, as an analysis of her recent appearances suggests that May has been begging for help for months.

Off The Perch spoke to the analyst who’s been observing May:

I first suspected that something was amiss during the conference speech when letters began falling off the wall. Most people missed this, but the falling letters actually spelled, ‘OH GOD. OH CHRIST. WHY WON’T IT STOP?’

I started looking back through her other appearances, and I noticed that May appeared to be blinking in Morse code. Mostly, she was signalling: ‘HELP ME. THEY’RE MAKING ME BE PRIME MINISTER. THEY’VE GOT MY LAST HORCRUX.’

No one noticed she was blinking in code, because everyone thinks she is just crap. Which she is, to be fair. But on top of being a bad public speaker, she’s also been blinking a plea for help.

There was a meal where she arranged her mashed potatoes into a big SOS too. And another one at which she threw gravy in David Davis’s face and tried to leap out of a window.

And in retrospect, that last one was a real giveaway.

Obviously, having a Prime Minister who doesn’t want to do the job is a bit of a problem.

A bigger problem is that the Tories who do want to be PM would be so much worse.

And then we’ll all be blinking for rescue.