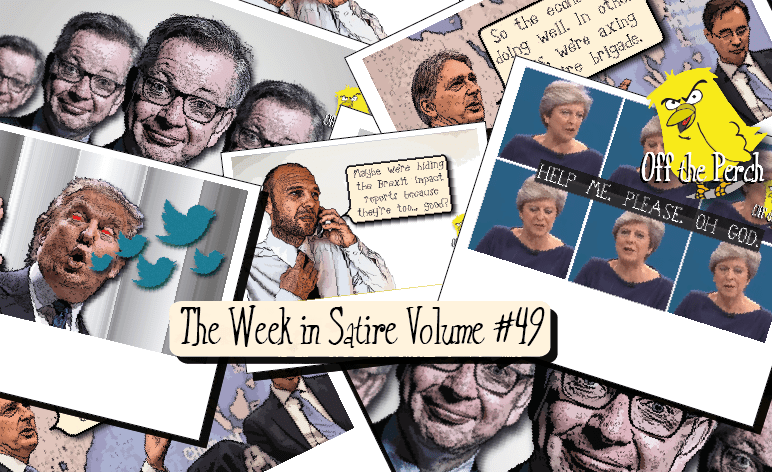 A week in which Brexit continued to move… forwards? Well, maybe not forwards, but it certainly went on at least. And increasingly, every week that we don’t crash out with no deal is looking more and more like a victory. 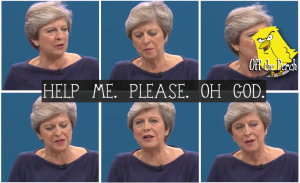 May caught blinking ‘HELP ME!’ in Morse code at Brexit dinner

A recent leaked report suggested that Theresa May “begged for help” at a dinner with EU leaders.

This behaviour could just be the tip of the iceberg, though, as an analysis of her recent appearances suggests that May has been begging for help for months.

Off The Perch spoke to the analyst who’s been observing May:

I first suspected that something was amiss during the conference speech when letters began falling off the wall. Most people missed this, but the falling letters actually spelled, ‘OH GOD. OH CHRIST. WHY WON’T IT STOP?’

I started looking back through her other appearances, and I noticed that May appeared to be blinking in Morse code. Mostly, she was signalling: ‘HELP ME. THEY’RE MAKING ME BE PRIME MINISTER. THEY’VE GOT MY LAST HORCRUX.’

No one noticed she was blinking in code, because everyone thinks she is just crap. Which she is, to be fair. But on top of being a bad public speaker, she’s also been blinking a plea for help.

There was a meal where she arranged her mashed potatoes into a big SOS too. And another one at which she threw gravy in David Davis’s face and tried to leap out of a window.

And in retrospect, that last one was a real giveaway.

Obviously, having a Prime Minister who doesn’t want to do the job is a bit of a problem.

A bigger problem is that the Tories who do want to be PM would be so much worse.

And then we’ll all be blinking for rescue. 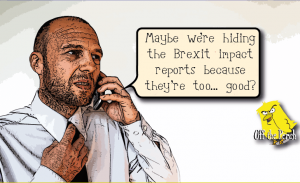 Brexit impact reports supressed because the outlook is ‘too good’, claims sweating minister

The government is refusing to publish multiple studies into the impact of Brexit. Some have claimed it’s because the expected impacts are so terrifying that reading them would be like staring into the Ark of the Covenant.

But is that really the case?

Off The Perch caught up with a Brexit minister to find out more.

The minister told us:

The impacts we’re expecting are so good that it’s impossible to read them without becoming terminally excited. It’s like the Monty Python sketch about the joke that’s so funny it kills you. And as such, the reports have been deemed a public safety risk.

We asked for an idea of what some of these impacts might be. We were told:

Well, I can probably give you a hint. Like… erm… we’ll be getting really straight bananas again. Or is it bendy bananas we want? Whichever is more patriotic anyway. That’s what we’ll be getting.

We’re also expecting… you know… trade… There’ll be some of that. Loads, probably. People will be queuing up to buy all of that… stuff… we manufacture.

And let’s not forget the NHS. Oh no, sorry – what I meant to say was let’s forget about the NHS. Although I’m not supposed to say that out loud am I – we’re just supposed to stop talking about it and hope nobody remembers.

If you think the release of these documents could help reverse Brexit, you might be being a tad optimistic. Because they probably don’t contain anything worse than what we already know.

New figures show that the UK economy grew by 0.4% between July and September. This is good news for the government, as obviously the less time they spend worrying about how much money we have, the more time they can spend dismantling public services.

The Chancellor of the Exchequer, Philip Hammond, was very excited about the news. This is what he said just after:

It just goes to show that poor people don’t know anything about the economy. They’re always complaining about having to use foodbanks, but the economy just improved by nearly half a percent, so I guess the country is doing pretty well, actually!

The extra cash will be appreciated, anyway. We’re hoping to spend it on a brand new Ministry of Austerity that will allow us to find even more things to cut. We reckon we might even make back as much as we put in if we cut things right!

Up for the axe so far are libraries, Spring, and the North.

Erwin Schrödinger postulated that if you put a cat in a box, said feline would be either dead or alive, but you couldn’t know which until the container was opened. This means that – theoretically – the cat is simultaneously dead and alive at the same time.

The Tory economy is very similar. Trapped in a state of being:

Unlike Schrödinger, though, the Tories haven’t been very good at keeping their cat in the box. Meaning the state of the economy is just that – an absolute fucking state that no one believes is working for them anymore. 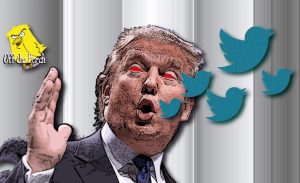 New research shows 100% of all Twitter users are bots

There’s been significant concern recently that Russia used Twitter to influence elections. The truth is even scarier. As it turns out 100% of Twitter users are in fact computer-generated bots.

When I created Twitter, I had two simple dreams – for people to stop calling me a nerd, and to own an Olympic-sized swimming pool filled with cash.

The problem was that no one wanted to use the platform, as it makes you feel like you’re massaging your brain with a scouring pad.

In an attempt to attract investors, we filled the site with bots. None of them were believable as real people, but weirdly everyone started paying attention to them. Before long, journalists were writing stories based on things that they said. Even though it was all imaginary and annoying.

Things really came to a head when one of our earliest bots – Donald Trump – got the Republican nomination. Despite having pretty much no capacity for mimicking genuine human speech, people were convinced he was authentic.

We assumed everyone would realise he wasn’t real eventually, but one day he showed up in reality. The bots found a way of turning what looked like a child’s drawing of an angry tangerine into a real life living person.

I’m speaking out now because things have gone too far. Twitter needs to stop!

If you’re worried that world events are being dictated by the snarky, 140 character comments of people who may not even be real, you should be.

And if you want to put a stop to Twitter, the best way is to log into your old MySpace account and get socialising. Because the only way to curb Twitter’s importance is to make MySpace great again!

CONTENT NOTE: THIS ARTICLE WAS PAID FOR BY JUSTIN TIMBERLAKE AND THE MYSPACE CORPORATION.

The following is a transcription of an overheard conversation between a powerful man and his golf caddy:

CADDY: Because it’s revealed that many major industries have been protecting high level abusers? Or because it’s now achingly apparent that most women have experienced abuse on some level?

POWERFUL MAN: Yes, the second one! Because now they won’t stop going on about it!

CADDY: Err… that’s not what I was-

POWERFUL MAN: I mean, come on, ladies. We’ve all seen the ‘Me Too’ hashtag now. Haven’t you put us through enough already?

CADDY: I thought there were some moving accounts actually.

POWERFUL MAN: Christ, I never actually clicked on it. But I knew I was supposed to. And that was stressful enough.

CADDY: Okay… but surely you see how it’s worse for-

POWERFUL MAN: I just feel like we need to get back to how things were. When people didn’t talk about these things. When we were all happier. Or at the very least pretending to be happier.

POWERFUL MAN: I know! Why don’t we make jokes about it? That’ll cheer us all up. I’ve got one – KNOCK KNOCK!

The powerful man kept on laughing like that whenever anyone brought the issue up.

Because some people refuse to see the funny side of things.

And you shouldn’t have to stop doing something you enjoy just because people ask you to stop – just because it’s causing them pain.