The NHS is now ‘this much gooder’, claims Jeremy Hunt - Canary 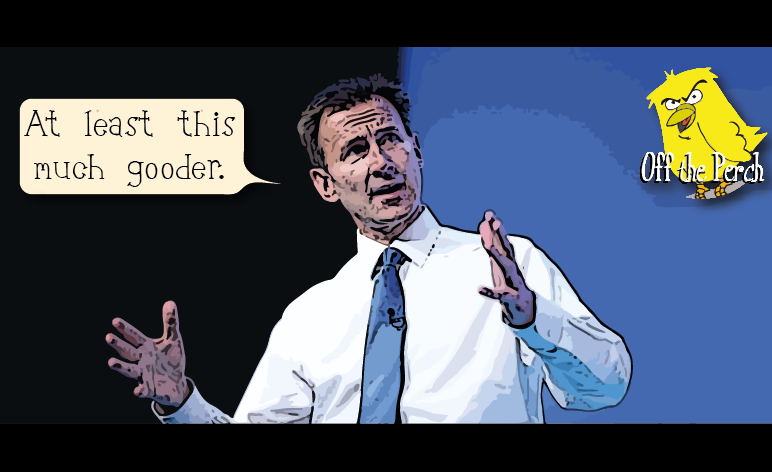 No matter how bad the NHS gets, Jeremy Hunt is prepared to appear on national TV and claim that not only is everything okay, it’s actually – if anything – getting better.

In the past, Hunt would use misleading figures. Having realised that no one believes him anyway, he’s now using less rigorous claims.

Things can only get gooder

When asked why the NHS was so much worse than before he was allowed to put his slimy, goblinoid hands all over it, Hunt replied:

Yes, it is a lot better now. Some might say too good. Others might say we’re spoiling you!

The confused interviewer asked why patients were so increasingly unhappy, then:

Patients are actually more happy now than ever. Just yesterday I overheard a patient saying the longer waiting times had given him a chance to take up a new hobby. He said it was ‘calling that wanker at the Health Department, and asking what’s going on’.

The interviewer followed up by pointing out that doctors and nurses also seemed to be quite vexed with him:

They feel so comfortable with me that they insult me like they would an old friend. It’s like when you’re out with friends and they say something standard like: ‘You should be in prison, you poisonous, fucking slug.’

At this point, there’s basically no reason to listen to anything Hunt says. To get an accurate reading of his interviews, we recommend you: