'Let the EU nurses leave!’ say people who can afford to go private | The Canary 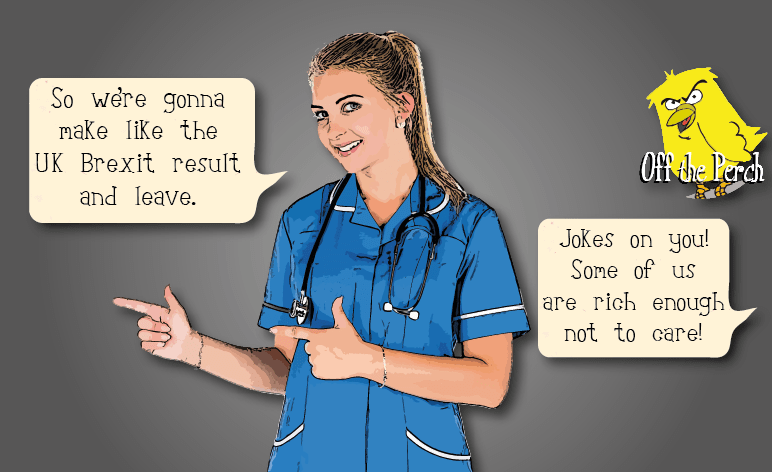 There has been some concern about the decline in EU nurses wanting to work in the UK. Or at least there has been amongst:

unpatriotic cowards who should deal with things getting worse so that we can make things better.

This statement having been made by someone who is wealthy enough to receive private health care.

Speaking to a crowd of Brexiteers, Lord Bile-Gland went on to say:

People these days are too coddled. In the old days, your average peasant would just keel over and croak it with nary a fuss. And look at the war generation. They didn’t even have bananas, and you didn’t hear them complaining!

At this point, a member of the crowd pointed out that WWII was actually somewhat unpopular. They also suggested that maybe we should be aiming for a higher standard of living than the Blitz.

This caused Lord Bile-Gland to shout:

A call that resulted in scores of angry men brandishing rolled-up copies of The Express falling upon the enemy of the people.

The government does intend to make up for the EU nurses we’re repelling by training more of our own. The problem with this plan being that:

Unless of course it was their secret intention to ruin the country and run through scandals like Theresa May runs through crap soundbites.