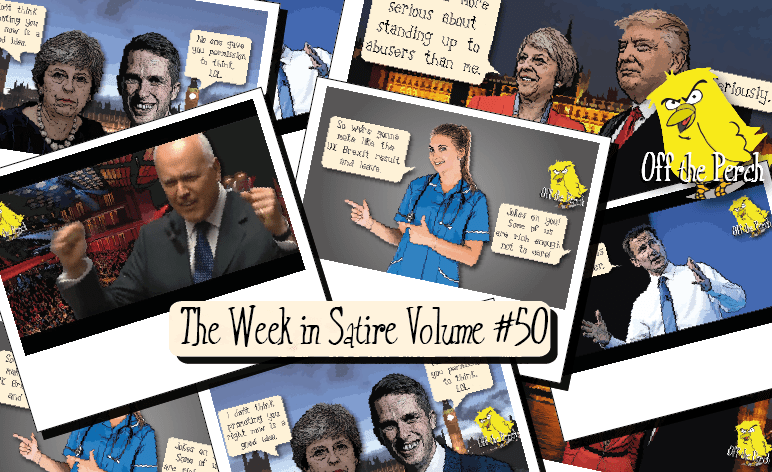 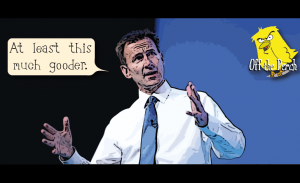 The NHS is now ‘this much gooder’, claims Jeremy Hunt

No matter how bad the NHS gets, Jeremy Hunt is prepared to appear on national TV and claim that not only is everything okay, it’s actually – if anything – getting better.

In the past, Hunt would use misleading figures. Having realised that no one believes him anyway, he’s now using less rigorous claims.

Things can only get gooder

When asked why the NHS was so much worse than before he was allowed to put his slimy, goblinoid hands all over it, Hunt replied:

Yes, it is a lot better now. Some might say too good. Others might say we’re spoiling you!

The confused interviewer asked why patients were so increasingly unhappy, then:

Patients are actually more happy now than ever. Just yesterday I overheard a patient saying the longer waiting times had given him a chance to take up a new hobby. He said it was ‘calling that wanker at the Health Department, and asking what’s going on’.

The interviewer followed up by pointing out that doctors and nurses also seemed to be quite vexed with him:

They feel so comfortable with me that they insult me like they would an old friend. It’s like when you’re out with friends and they say something standard like: ‘You should be in prison, you poisonous, fucking slug.’

At this point, there’s basically no reason to listen to anything Hunt says. To get an accurate reading of his interviews, we recommend you: 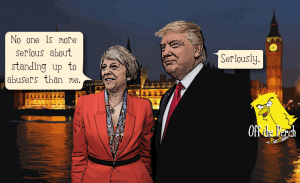 Government to restore confidence by tackling abusers. Starting from… now!

According to recent reports, Westminster is riddled with abusers. The government intends to restore confidence by making sure that anyone caught in the future will be held accountable. Although some have said that, if it really wants to restore confidence, it should kick out the filthy fuckers it already knows about.

Reporters asked a Tory official why the government isn’t dismissing these creep-wads:

Well, it wouldn’t be fair. There wasn’t a proper system in place before, so these men assumed they could get away with it. You can’t go around persecuting people for things you retrospectively decide are wrong.

They then pointed out that, not only were these things already wrong, but they were actually illegal:

Well yes, but not properly. You could still get away with them. It’s not a proper crime if it’s not enforced. It’s like doing 80 on the motorway. Or stealing candy from a baby. Or selling arms to a country that’s perpetrating an illegal war.

Someone asked if dismissing MPs would be ‘unfair’ to Theresa May as opposed to the victims:

Of course I meant that. We wouldn’t have a government if we started dismissing people. Who did you think I meant? Other people? Ha ha – that’s hilarious!

The problem with Theresa May saying that she’s serious about tackling abuse is that she isn’t.

The problem with her saying she’ll get the job done is that she already hasn’t.

And the problem with her saying she will refresh confidence in politics is that she couldn’t even refresh a web page. 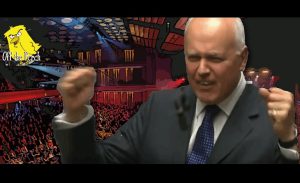 It was a star-studded evening at the Pride of Britain Awards on Monday 30 October. And among the glittering line-up, one of the stand-out awards went to the Conservative Party, which was handed the “Best Contribution to Eugenics” gong.

The nominees in the Eugenics category included:

But in the end, the Conservatives took home the award. Handing out the gong, host Richard Spencer said:

The significance of the Conservative Party’s work in the area of Eugenics cannot be understated. Not only has it managed to demonise the entire disabled community but, in turn, it has completed a triple-whammy by hitting them economically, culturally, and socially. That is quite some feat, I’m sure you’ll agree!

Spencer noted some of the Conservative Party’s greatest achievements to date against disabled people. These included cutting:

It is an honour and privilege for the work that I helped implement to finally be recognised. Not least that I will now see Universal Credit come into full fruition. I would like to thank both David Cameron and Theresa May, for allowing myself and my successors to implement our vision of a society where all disabled people are eventually classed as subhuman.

I’d also like to thank the press for allowing us to act with impunity, to ensure the ‘useless eaters’ in 21st-century Britain are slowly stopped from being the burden on the taxpayer they currently are.

Work sets you free! Thank you!

The gong, fashioned as a bust of Joseph Goebbels, is inscribed with the names of the 590 people that may have taken their own life due, in part, to government fit-for-work tests. The award was a fitting end to seven years of Tory austerity and attacks on disabled people. And it will sit on the party’s mantelpiece, alongside the Oscar for “Best Weak and Wobbly Performance” and the BAFTA for “Most Lies Told During An Election Campaign”. 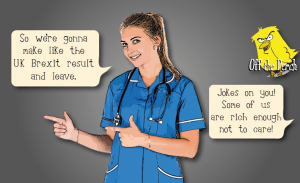 ‘Let the EU nurses leave!’ say people who can afford to go private

There has been some concern about the decline in EU nurses wanting to work in the UK. Or at least there has been amongst:

unpatriotic cowards who should deal with things getting worse so that we can make things better.

This statement having been made by someone who is wealthy enough to receive private health care.

Speaking to a crowd of Brexiteers, Lord Bile-Gland went on to say:

People these days are too coddled. In the old days, your average peasant would just keel over and croak it with nary a fuss. And look at the war generation. They didn’t even have bananas, and you didn’t hear them complaining!

At this point, a member of the crowd pointed out that WWII was actually somewhat unpopular. They also suggested that maybe we should be aiming for a higher standard of living than the Blitz.

This caused Lord Bile-Gland to shout:

A call that resulted in scores of angry men brandishing rolled-up copies of The Express falling upon the enemy of the people.

The government does intend to make up for the EU nurses we’re repelling by training more of our own. The problem with this plan being that:

Unless of course it was their secret intention to ruin the country and run through scandals like Theresa May runs through crap soundbites.

When Theresa May promoted the chief whip in the middle of a whip’s office scandal, many people were flabbergasted; with ‘many people’ including Tory MPs:

The assumption is that May is so weak that Gavin Williamson – the former chief whip – is now able to operate her like a drab muppet.

It turns out that May isn’t being controlled, though. Or at least that’s what she claimed in a speech that was suspiciously written by Williamson himself.

I am not a puppet

Speaking outside 10 Downing Street, May said:

There is something I would like to clear up. I did not promote Gavin Williamson because he knows my deepest, darkest secrets. Far from it. I promoted him because he is the right man for the job.

May glanced at Williamson before reading the next part – a look of nausea on her face:

I would also like to say that Gavin Williamson is the single best human being I have ever met. And in all honesty, he would make a much better prime minister than myself. Although, obviously, I will be around for the foreseeable…

May looked at Williamson again as he held up several fingers:

for at least another eight months.

The PM then shuffled away, muttering: “Jesus – that long?”

People are wondering what dirt Williamson could possibly have on May. The rumour is that, when May said she once ‘ran through a field of wheat’, what she actually meant was ‘killed and ate a clown’.

Although obviously that’s just a rumour.