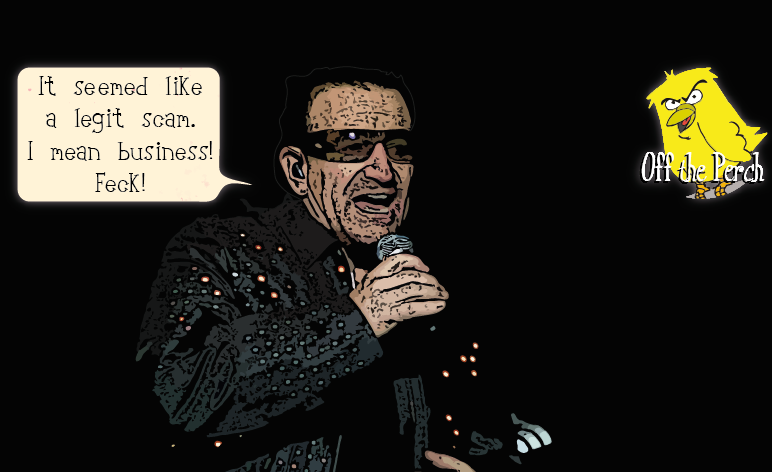 This week, folks were surprised to learn that many of the richest people are avoiding paying tax. Although obviously, by ‘surprised’ I mean ‘not surprised at all and really fucking angry’. With the only person who’s actually claiming shock being Bono.

Bono explained his innocence on MTV (if MTV is still even a thing?):

Look, I know it looks weird that I’m an investor in a Lithuanian shopping centre. But it isn’t. Okay?

This is standard rock and roll stuff. It’s where the saying ‘sex, drugs, east-European infrastructure, and rock and roll’ comes from.

I ended up getting into it after a three-day investment bender I went on with Sting and Bob Geldof. It was wild! Sting ended up becoming a majority shareholder in an Albanian pork rendering plant: Geldof bought a minority stake in the Transylvanian power grid.

It was a real legendary session. I could feel the ghosts of Jimi Hendrix and Jim Morrison there with us.

Stuck in a moment

Of course, the real victims of the Paradise Papers are all the innocent multi-millionaires who simply had no idea what their money was doing. The wealthy men and women who handed their finances to some sleazy accountant or other and said:

Here you go. Turn this money into a shit-load more money, please – no questions asked. HAHAHAHAHAHAHA.

Well, not ‘poor’, obviously. As there’s still no danger of them suffering financially.