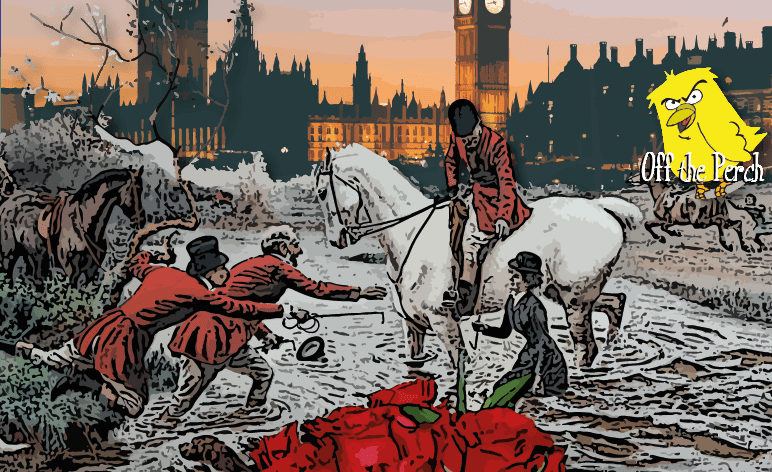 In the wake of another startling rise in the number of rough sleepers, the government has announced that Conservative Party members will be assisting the police with the removal of homeless people from city centres.

Any Tory with hunt experience has been instructed to saddle up and get ready to ‘release the hounds’. But the move will prove controversial, as the dogs involved will require costly training to be ready to bay for human blood.

Announcing the policy, Secretary of State for the Clearing of the Underclass, No-Good’uns, and Tramps (The Canary has chosen not to print the acronym), Lord Flashheart of Killemoff said:

Many of us were born into hunting, so it seems like only a natural progression that we assist police in clearing the homeless vermin from city centres. The homeless population needs controlling, and hunting with hounds is the fastest and least cruel method. Shooting could always injure rather than kill, and snares are indiscriminate. Old or ill homeless people are more likely to target easy prey for cash, like liberal students. But in turn, they are the most likely to be caught by hounds.

Off The Perch spoke to one young Tory, Tarquin Snortalot. And we put it to him that some people, and also possibly readers of The Guardian, may be outraged by the thought of hunting homeless people:

People don’t understand that homeless people are pests. There’s been a lot of argument that homeless-hunting is cruel, but it depends on your definition of cruelty. Shooting a rough sleeper can leave it in pain and distress, but when the hounds get it, it’s dead pretty quickly.

The hunts are going to begin in the London Borough of Newham, where one in 25 people are now homeless. It is hoped that by clearing the rough sleepers from city centres, businesses like breakfast cereal cafes and yoghurt knitting shops will be encouraged to move in.

But with conservative estimates now putting the number of homeless people in England at nearly 300,000, the Tories will have their work cut out. Meanwhile, foxes everywhere are breathing a sigh of relief.