Theresa May's government has just landed a role in EastEnders as its new, dysfunctional family | The Canary 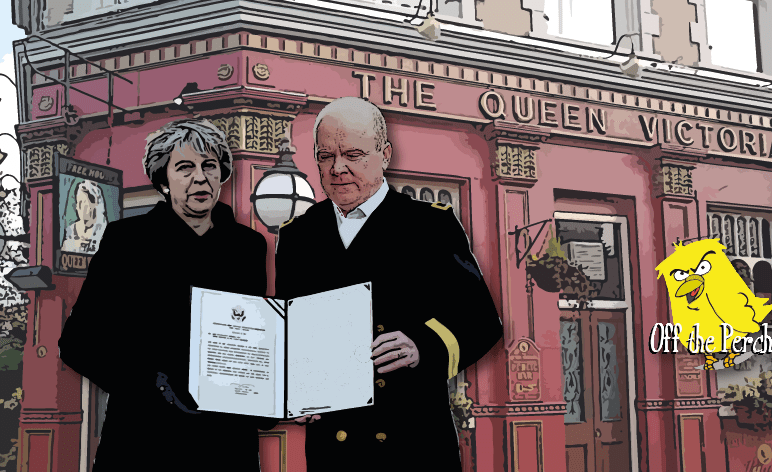 BBC One soap opera EastEnders has announced the arrival of a new dysfunctional family in Albert Square. And in a move to win the ongoing ‘ratings war’ with ITV’s Coronation Street, BBC bosses have taken a bold move: they’re introducing the ‘Conservative Cabinet’ family.

Anyone can fall in love…

The Cabinet will be led by matriarch Theresa. Her character, a battle-worn mum-of-three will be the archetypal EastEnders female. With a JPS Superking hanging limply from one corner of her mouth and her hair in permanent rollers, producers say she’ll be known for her beige cardigans and handiness with a frying pan. But, as one producer told Off The Perch:

As soon as the Cabinet arrives on Albert Square, viewers will quickly see that Theresa’s matriarchal image is little more than a facade. Unable to control her children, and the product of years of living in a loveless relationship with second-hand car salesman ‘Call Me Dave’, her family quickly begins to crumble around her. With betrayals from the uncle, an out-of-control estranged daughter-in-law, and sons who think of no-one but themselves, Theresa’s strong and stable image soon begins to collapse…

Sun and rain; joy and pain…

EastEnders was unable to tell Off The Perch when the family will make their first appearance on our screens. But producers did say that they were waiting for the British public to “wake the fuck up and boot the actors out of their current jobs of fucking up the country”.