‘Russia to blame for this terrible UK government’, claims the Prime Minister - The Canary 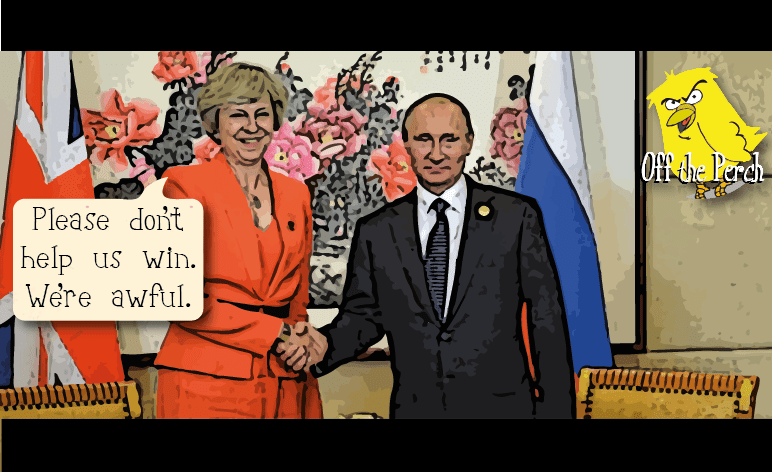 People have accused Russia of meddling in Western elections for a long time. The evidence that Vladimir Putin is continuing this trend is increasingly apparent. But even if it wasn’t, the way he’s always smirking is a dead giveaway.

The UK government has now explicitly said that Russia meddled in elections. It also apologised, saying:

We’re really sorry about this. We wondered how we’d managed to stay in power, too.

Putin has since come clean about his activities. Appearing topless and on bear-back, the Russian leader told reporters:

You know how these things go. I was sitting up one night, discussing the collapse of bourgeois Western hegemony, when a junior minister says he can maybe make these things so.

I not take him seriously, as he is what you call computers boffin. I authorise him to go ahead, though, because I have too much to drink. Unbeknownst to me, this man goes away and claims Facebook for Mother Russia.

One year later, I hear about Russian interference for the first time. At first I laugh it off. Then I find out it was us.

Increasingly, this joke is not so funny. I mean – it’s still pretty funny, but wow – this shit is a mess.

Russia has claimed responsibility for Trump, Brexit, and the Conservative government. All three things will be continuing, though.

Some people have complained about this, saying it’s not really ‘democracy’ if it’s open to influence by malign and powerful forces.

If you’re one of these people, you should maybe Google the ‘history of Western democracy’. Because there’s nothing new about democracy being broken. The only development is that it’s now #broken too.