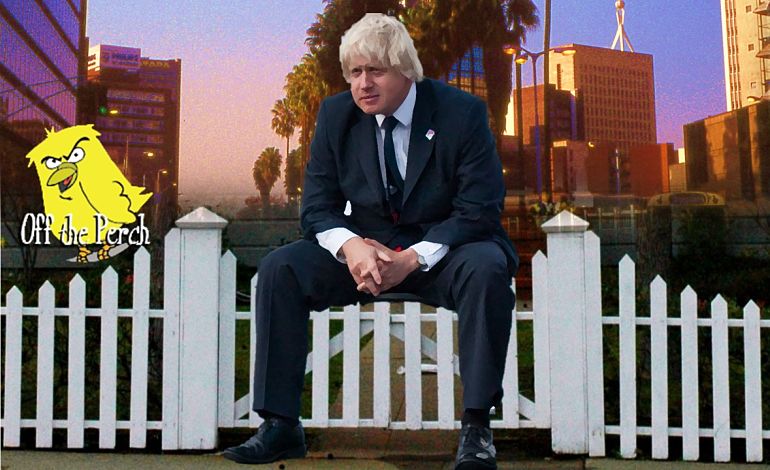 Boris Johnson has responded to the crisis in Zimbabwe, where what may or may not be a military coup has been taking place to oust President Robert Mugabe. And the Foreign Secretary didn’t mess about, as he promptly boarded a private jet to the troubled African state, found a fence to sit on outside the British embassy and took it easy while watching some dust settle.

Johnson was setting out the Foreign and Commonwealth Office’s (FCO) position on the developing situation in Zimbabwe. On Wednesday 15 November, after military tanks rolled into the capital Harare, Mugabe was placed in a doll’s house and ordered by the military not to come out until:

We have decided who is best placed to run the most crack-pot and brutal dictatorship in the country’s history.

He was also reportedly told to sit on the tiny ‘naughty step’ in the house, and “think about what he’d done”. Meanwhile, the country’s media reported to the public that the situation was:

There’s been NO military takeover!

While armed secret police held AK-47’s to the reporter’s heads.

Johnson, however, was advised by the FCO’s Chief Civil Servant, Sir Handley Wringworth, that it would be “prudent” to “hedge his bets” and not say “anything for or against either side” at present. One FCO source told Off The Perch that ministers had privately said:

As longs as those fucking diamond mines are safe, Johnson can say as many racist fucking remarks as he wants…

But it seems that, for once, Johnson appears to be toeing the government line. Pictured wearing a fedora, with a can of Special Brew in one hand and some pork scratchings in the other, he told reporters:

We are monitoring this situation very closely and our embassy is running a book on who’s going to win this smackdown. At the moment it’s very fluid and it’s hard to say exactly how this will turn out. Everybody wants to see someone take charge; frankly, we don’t give a fuck who it is as long as the backdoor to deals remains open. We’re appealing for everyone to join in this hedge betting bonanza, because currently the odds are too close to call.