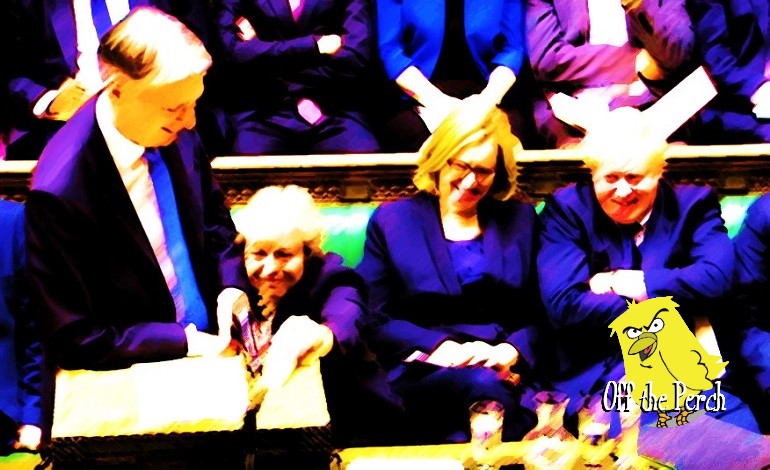 Philip Hammond made a last-minute addition to his 2017 autumn budget in the early hours of Thursday 23 November. Making the announcement via his Snapchat, he revealed that the government will be launching an “ideas tax”, in an attempt to claw back the comprehensible thought that the Conservative Party has reportedly run out of.

Senior Conservative Party sources told Spiv Weekly that the Chancellor had come to the decision after nine pints of the special “concoction” he was seen supping with Theresa May just after Prime Minister’s Questions on Wednesday 22 November.

During a meandering speech in the Commons’ Strangers’ Bar, Hammond reportedly said – between slugs on a pint glass full of Laphroaig Single Malt:

I kno… I know that the saynayers… naysayers will be concerned that the budget seemed like we’d… well… kind of… written it on the back of a bloody fag packet on Tuesday night. And they wouldn’t be far. Bloody. Wrong! [to assembled guffaws] After ALL, we all know how Jacob likes to tug on a Cut Navy Player of a weekend…! [more guffaws]

The things is, chaps – we’re a teeeensy bit out of fucking steam, here. Tess, God bloody love the woman, is floundering like Dugdale in a tushbucker trial. Sshhe… sshee… can barely budget for Larry the fucking CAT, let alone Brexshit [louder guffaws and some groans]

After a swift pull on a rather large Cuban and then double dropping several of May’s ‘cough sweets’, Hammond revealed:

But then it came to me! Jush because WE’RE all out of bloody ideas doesn’t mean the rest of the bloody country is! SO… I intend to impose an immediate Ideas Tax. Flat rate. No fucking messing around. 70% for anyone who comes up with something more leg… ledge… ledgibala… that makes more sense than we bloody well can. [collective hurrahs]

And heeere’s the money shot. The fuckers in this country will be so bloody scared of paying a bit more tax towards nonsense like the HNS… NHS… that they’ll STOP coming up with ideas! Huzzah! That should buy us enough time to pilfer some more of Labour’s before the schpring. [louder hurrahs]

Anyways, if someone can get this out on my Chatsnap bloody pronto, I’m done for the fucking day! Onward and bloody upward! Here’sh to the nesht five years! [collective ‘yahs, hurrahs and a groan from Boris Johnson]

Do not go gentle into that good night

Spiv Weekly reported that Hammond was last seen lolloping towards Pleasuredome Sauna near Waterloo with a Welsh intern called Findlay. As for the Ideas Tax, a senior Tory source told Off The Perch:

It’ll probably go the same way as Kezia Dugdale’s career has. Straight down the shitter.