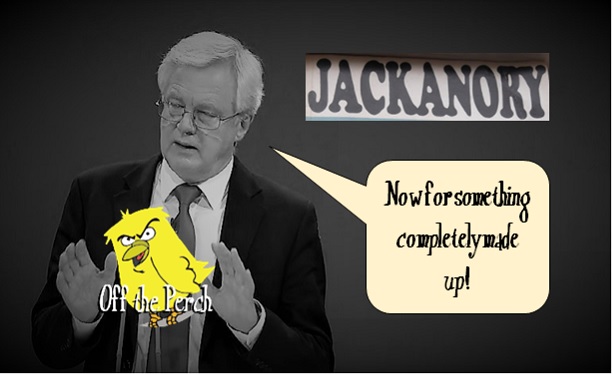 David Davis looks set to host a reboot of the children’s storytelling show Jackanory. But according to one BBC insider, there are concerns that Davis will “not be able to match the levels of made-up bullshit he spewed over Brexit”.

The Romans are coming!

As right-wing celebrity magazine OK, Yah! first reported, producers approached Davis after being impressed with his performance over the Brexit impact assessment papers. The BBC later asked him to do a screen test. And Off The Perch managed to get its hands on a copy of the transcript.

Leaked stills of the audition show Davis fashioned as Boudicca, wearing nothing but a blood-stained EU flag and grasping a bent cucumber. He is sitting astride an out-of-control driverless car. A BBC insider told Off The Perch that they had approached Boris Johnson and Michael Gove to sit bare-chested beneath Davis; they politely declined.

Meanwhile, here’s some bullshit I made up earlier

Davis then tells the story of The Man Who Cried Impact Assessments, from Aesop’s Fibs:

There once was a snake oil spiv who was bored as he sat in parliament watching the other village idiots. To amuse himself, he took a great breath and sang out, ‘Brexit! Brexit! We need Brexit impact assessments!’

The village idiots sat bolt upright to help the spiv work out the cost of leaving the EU. But when they checked the parliamentary agenda, they found no impact assessments. The spiv laughed at the sight of their angry faces.

‘Don’t cry ‘impact assessments’, spiv’, said the village idiots, ‘when there aren’t any!’ They went grumbling back to troughing at the gravy train.

But the spiv just grinned and watched them go grumbling down to the Strangers’ Bar.

Later, he saw the REAL impact assessments in the Department for Exiting the EU. Alarmed, he leaped to his feet and sang out as loudly as he could, ‘Impact assessments! Impact Assessments! They’re redacted, but they’re HERE!’

But the village idiots thought he was trying to fool them again, and so they accused him of being in contempt of parliament.

Later, everyone wondered why the spiv hadn’t returned to parliament with the impact assessments. They went to the Strangers’ Bar and found him weeping into a large cognac.

An old man called Ken Clarke tried to comfort the boy as they walked back to parliament.

‘We’ll help you sell this to the public in the morning’, he said, putting his arm around the spiv. ‘Nobody believes a liar… even when he is telling the truth!’

A BBC insider told Off The Perch that Davis’ bullshit story was so convincing that “he should be in charge of Brexit”. Off The Perch reminded him “this fucking idiot is”…