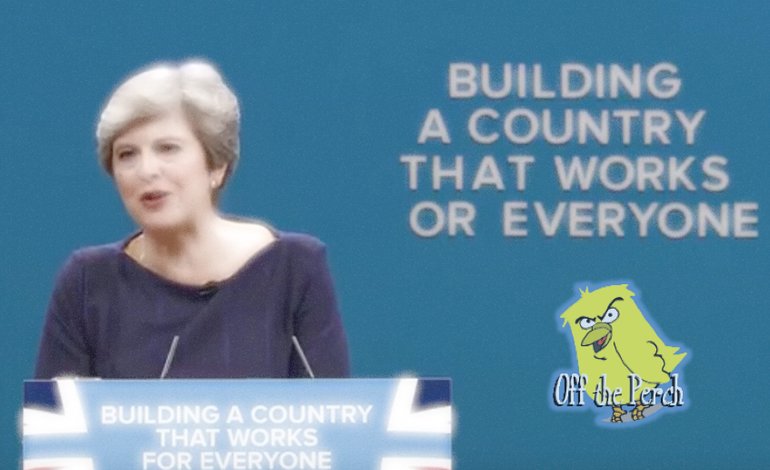 Theresa May unveiled the Conservative Party’s new logo today, at a private ceremony in Mayfair. A senior source within the party described the £62m rebranding exercise as “surpassing the giddy limit of stupidity”.

A day late and a dollar short

The Conservative Party opened bids for the rebrand in May, with a budget of £25,000. And the project was awarded to Richard Branson’s new Virgin PR firm, which promised to deliver by August and within the budget envelope. Ultimately, the project came in three months late, with a final cost of £62m.

Asked to explain the 247,900% increase in cost, Virgin PR spokesperson Yubin Dunnover told Off The Perch:

Due to unforeseeable changes in the project landscape, original cost and schedule specifications were reforecast. Project stakeholders were engaged throughout the reforecasting process.

Prime minister Theresa May also defended the delays and increased costs, telling reporters at the event:

Due to unforeseeable changes in the project landscape, original cost and schedule specifications were reforecast. Project stakeholders were engaged throughout the reforecasting process.

Unveiling the the new logo at a private event at Claridge’s in Mayfair, Virgin PR Design Chief Al Oda-Cobblers announced the logo would be a gif. He told assembled guests:

We felt the moving gif versus the static image would communicate the dynamism of the modern Conservative Party.

First, May unveiled the logo which came in third: “The Conservative Kick”. Oda-Cobblers said:

This design communicates the futility of pity. The animal does not seek support, but simply the quiet to get on and help itself. Humans deserve the same. So, what is the point of the welfare state really?

In second place: “Brexit”. The prime minister clicked past the image hastily. She told guests:

I have no idea how that got in there.

The gif featured a child crying while banging on a window.

But the winning gif, and the new Conservative Party logo, was something quite different. Entitled “Musical Chairs”, it shows a group of people playing a particularly violent round of the game. A woman bodychecks a man to win the seat, only to have it collapse beneath her.

But some in the room felt the gif was open to misinterpretation. A serving cabinet minister told Off The Perch:

That woman is Theresa May. And that chair is our f*cking party.

An anonymous former Conservative chancellor who now edits the London Evening Standard appeared to defend the choice. He told Off The Perch:

I can’t think of a more accurate depiction of the modern Conservative Party.