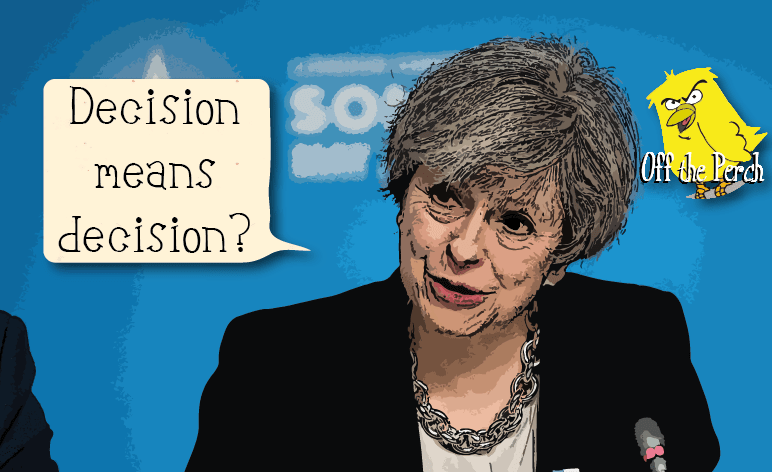 Theresa May is famous for two things:

May is now in a position in which she has 48 hours to get Brexit back on track (after she decided not to let the DUP know about the offer she’d decided upon).

This is going to be problematic. Because it may mean actually deciding what ‘Brexit’ means, if Brexit does indeed mean ‘Brexit’.

May was overheard trying to psyche herself up in front of a bathroom mirror. The following is a transcript of what she said:

All I have to do is decide which one – knowing full well that whatever I decide will be the thing that I’m ultimately remembered for.

At this point, an aide asked if the Prime Minister would be long, as the country wouldn’t run itself.

“Just a minute,” May answered. “I just need to decide if I’m going to dry my hands with the air dryer or the paper towels.”

Four indecisive hours later, she just wiped them on her dress and stepped outside.

This moment is what happens when an unpalatable choice meets an incompetent decision maker.

And whatever it is that May decides, it’s important that – in the future – we ignore anyone and everyone who ever described her as “a safe pair of hands”.

Because she’s really much more of a limp flipper.