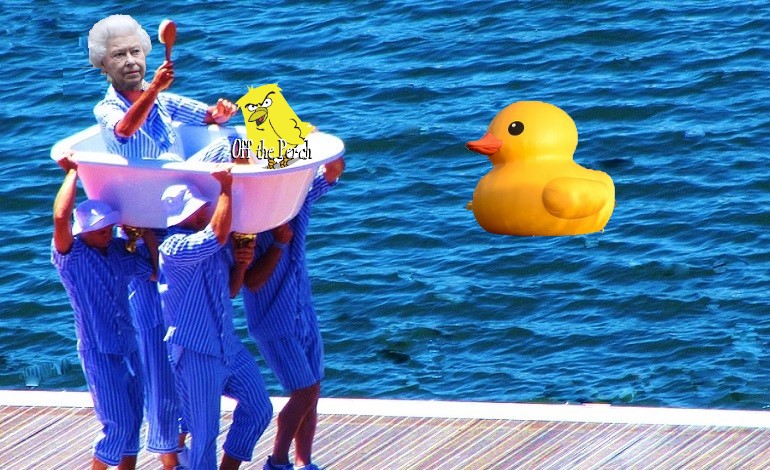 Amid a flurry of pomp, circumstance and bemused Japanese tourists, the Queen launched the Royal Navy’s latest asset in the fight against what it calls ‘Corbynist, liberal propaganda’ – the state-of-the-art Rubber Duck Defence System (RDDS) HMS Derek.

At a ceremony on Thursday 7 December, ‘Brenda’ (as the Queen now wishes to be known) officially unveiled HMS Derek, which British defence journal US Lapdog Weekly reported cost the Ministry of Cold War Hangovers three Steven Seagal DVDs and a packet of JPS Superkings.

Security at the event was tight, with the army drafting in its largest regiment, the Insurance Salesmen with Penis Envy Reserved Force. The weekend soldiers were showing off their latest hi-tech weaponry: the slingshot with papier-mâché pellets. The kit’s guidance system is reportedly powered by a refurbished ZX Spectrum with a fast, wind-up radio processor.

We are gathered here in Clacton-on-Sea today, just a short distance from HMS Brian, a flagship of our seafaring past and a reminder of the debt we owe to Goldman Sachs and JPMorgan – which, for longer than we’re going to tell you, have secretly dictated to the people of this country and our interests around the world.

As you prepare to take this country’s message of debt, crony capitalism and 21st century colonialism across the seas and oceans of the world, the Lord High Admiral – the Duke of Edinburgh – does want to know when he can have his rubber duck back…

God Save The Brenda

Launching a four pack of Special Brew onto HMS Derek, Brenda reportedly lurched for a swig on one, before being restrained by Princess Anne. She allegedly reminded her mother that “there’s a case of White Diamond at home, if you can just fucking wait”.

It is unclear when the ‘Matey’ bubblebath, HMS Derek’s main weapon, will be ready for service. But a Ministry of Cold War Hangovers source told Off The Perch:

If it’s anything like the F-35s for HMS Queen Elizabeth, this incompetent shit-shower of a government will probably be long gone before we see anything resembling a fully fucking operational military again…