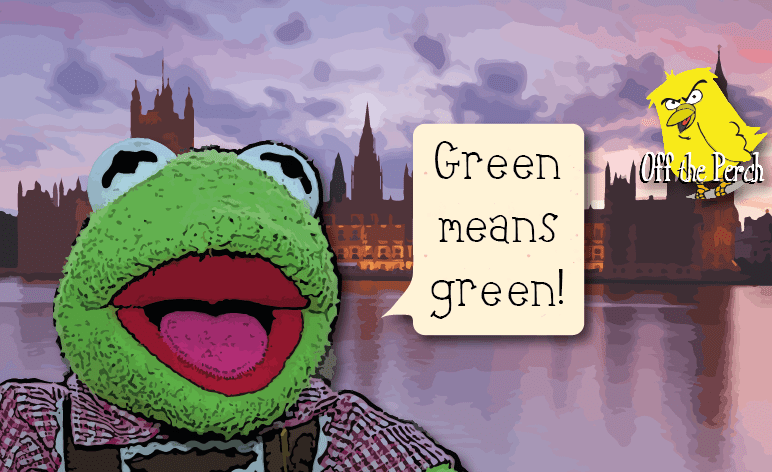 The Tories have realised two things this year:

As such, the Tories are having to say things which young people might like. Which is no skin off their noses because, as we all know, they’re happy to say anything to win votes. It’s the following through that they have an issue with.

This strategy of making empty gestures sometimes goes awry, however. As is the case with the government’s promise to ‘go green’.

It’s not easy being green

For some reason, Theresa May seemed to think that ‘going green’ meant… going green. Possibly because the Tories don’t really have much in the way of environmental policy, so how would she know?

This led to May donning what appeared to be a Kermit the Frog costume and telling journalists:

Hello, hip dudes. It has been said that young people do not like the Conservatives. Well I’m here to say ribbit to that!

The journalists in attendance looked confused at this point. May continued:

Because young people like frogs, you see? You do see, don’t you? Because… Boris… told me that… oh no.

At this point, a journalist pointed out that some young people liked Pepe the Frog, and asked May if she was supposed to be dressed like him.

“Yes!” May responded – presumably not realising that Pepe has become a symbol of white nationalism.

It’s a shame the Tories don’t take climate change seriously, as it’s the most important issue of our time. Although it’s not the end of the world*, as obviously we can just have government change at the next election.

*It probably will be the end of the world.