Disney purchases rights to every child's brain in $52.4bn deal with God - Canary 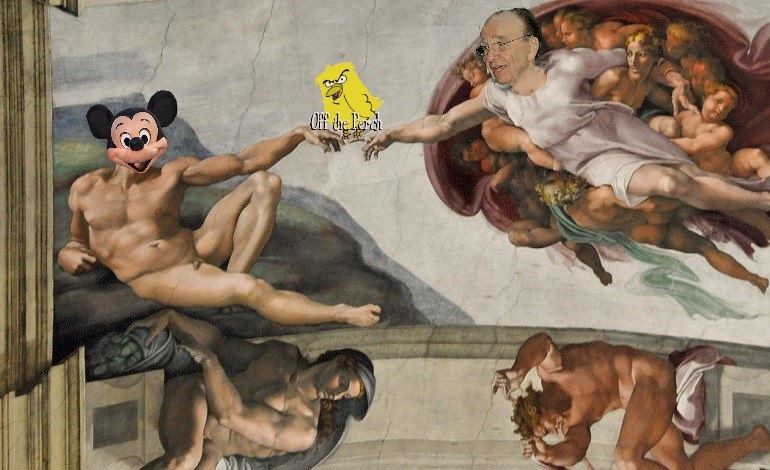 The Walt Disney Company has just bought the rights to every child’s brain, in a move many have described as “heartwarming”.

The US film company struck a reported $52.4bn deal with God to take full ownership of the minds of all children aged 0-18 years. Also as part of the deal, Disney now owns a 52% controlling stake in the cerebral matter of adult fans of Marvel, DC Comics, Family Guy and American Dad!. And the cast of The Big Bang Theory.

God and I had been in discussions with ‘The Big D’ for some time. They approached us with an offer, and – y’know – we thought ‘fair dinkum’. Disney has always been right up there with subconsciously influencing kids – from making the sheilas think they’ve all got to have great juggers, blonde hair and marry a prince, to spreading myths about lazy Jamaican crabs and promoting slavery. Hell – they even threw real lemmings off a cliff in the name of education and whitewashed the murder of indigenous Americans! Fox would struggle to be that bloody subversive…

Whistle While You Twerk

Murdoch said that the terms and conditions of the deal included:

God’s role is expected to be a background one, providing the necessary disease and catastrophic weather events if, and when, children get ideas above their stations.

Off The Perch managed to speak to God via a great white telephone. He/She/They/It exclusively told us:

Look, right. You lot were fucked as soon as the Romans got their shit together. I’ve long since given up on even trying to sort your shit out, so what’s one more megalomaniac corporation effectively seizing control of the entire media going to change? Lap it up, suckers! Hell yeah!

God muttered something about “scoring a Henry from Gabriel” before hanging up. Off The Perch can, however, confirm that The Simpsons have already predicted the End of Days in their latest, Disneyfied episode.