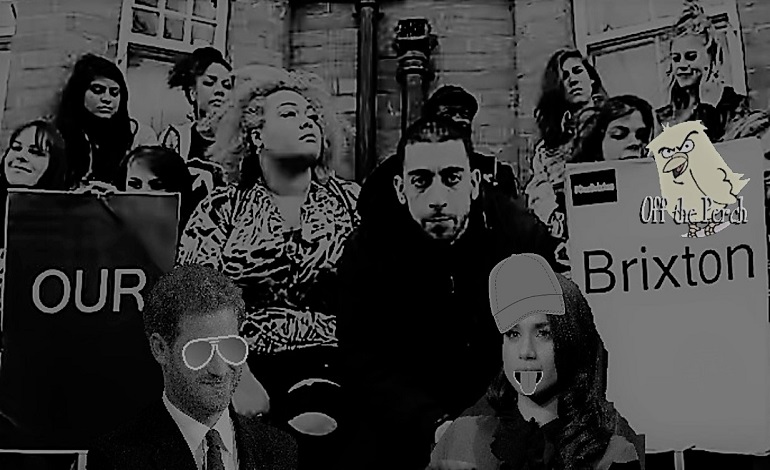 There were chaotic scenes during a royal visit to Brixton this week. On Tuesday 9 January, Prince Harry and bride-to-be Meghan Markle, during a ‘small game hunt’ of working class residents and homeless people, were confronted by rapping youths near the notorious Brixton Arches.

And one royal source told Off The Perch that the young lovers reportedly “shit their undercrackers” due to the excessive basslines and incomprehensible language – also known as ‘grime’.

One will trot down to Electric Avenue

Harry and Meghan were taking a break from chasing down homeless immigrants. In keeping with local culture, they were luncheoning on what is colloquially known as a ‘cheeky Nandos’. But en-route to the restaurant, they were accosted by a group of angry young people. Sources close to the royal couple told Off The Perch:

It was a terrifying turn of events for Harry and Meghan. Around 10-12 youths suddenly appeared wearing baseball caps, hoodies, and what we heard them refer to as brightly coloured ‘creps’.

These rapscallions were holding peculiar pieces of cardboard with unintelligible slogans daubed across them: ‘No Social Cleansing!’, ‘Homes for All!’, and ‘Whose Streets? Our Streets!’ Our security advisers have not, at this moment, decoded what these bizarre ramblings mean…

The situation became too dangerous after several of the youths were heard reciting what is commonly known as ‘grime‘ by an alleged artist going by the name of ‘Potent Whisper‘.

Harry and Meghan were quickly bundled into local radio station Reprezent 107.3FM. The visit was in fact prearranged, as Harry had been asked to ‘get down with the kids’.

My! The poor are confusing!

Confusion arose when the resident DJ went to do what is known in ‘underclass’, street-culture as a ‘fistbump’. Harry asked the DJ which lodge he was a member of, and whether he would be attending the Bilderberg conference this year. The DJ reportedly replied:

Wagwan fam! Bilderberg? I don’t know dem endz. What festival is that, bruv?

A bemused Harry and Meghan asked local Labour councillor and Chair of the Committee on Purging the Poor, Lib Peck, to translate. But on hearing Harry’s request, the DJ took immediate offence, angrily shouting at Meghan:

Is he mad bruv? I’m first-born British in my fam! My pops is white, innit? I’m mixed like you, sis. Is he being racist?

“My family aren’t racist!” said Harry, “I nearly had a Muslim stepfather!”

At this point, security deemed that events were spiralling out of control. So Harry and Meghan were helicoptered to a more secure, socioeconomically appropriate postcode for full fumigation.

A senior royal source told Off The Perch:

It is always upsetting when the royals have to meet real members of the public. Especially in one of the most deprived, socially-cleansed Labour-run boroughs in London. But Harry and Meghan handled the unfortunate events with utter professionalism. They literally turned their fucking noses up and looked the other way. Textbook, in my opinion!