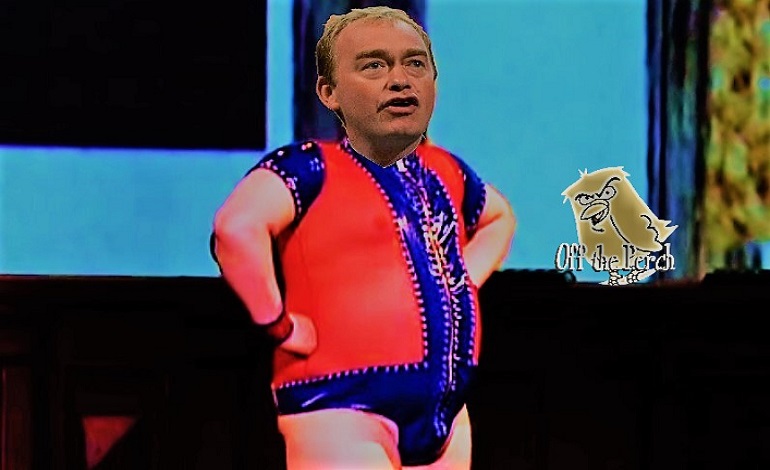 The Liberal Democrats were plunged into chaos on Thursday 11 January, after revelations in Christian Fundamentalist Weekly that Tim Farron had been caught “cruising” with an Anglican vicar.

The former Lib Dem leader was papped on all fours at the back of a gay sauna in Soho in the early hours of last Sunday morning. Exclusive images were passed to Off The Perch, but due to our readers’ delicate stomachs we have chosen not to publish them.

They did, though, include stills of Farron dressed in studded leather chaps, matching waistcoat, a pink leather army beret and zirconia-encrusted shin-high cowboy boots. Other images include Farron performing what is colloquially known as “the Barclays” on the vicar and attempting to entice a 23-year-old man into the fray with the offer of a packet of JPS superkings and an internship at Lib Dem HQ.

So far, both Farron and the Lib Dem press office have refused to comment.

Farron hit the headlines on 10 January. He had claimed in September 2017 that he thought gay people were “amusing and witty TV hosts who liked to wear fancy shoes and walked a bit funny”. This statement followed a grilling from a journalist in August in which Farron, responding to accusations he was “homophobic”, protested:

But on Wednesday, exiled Lancastrian Farron reneged on all previous claims, telling The Mormon Times that:

Norman Lamb made me say it! I can’t stand the wolly woofters really. Scripture clearly stated that a ‘man shall not lie with another man’, and I’m sure it said something about bisexuals sleeping with women as well… How anyone can think that having something pushed up yer patootie is right beggars belief. Imagine if yer eggbound…

Now, though, this emerging scandal – reportedly also involving a Lib Dem placard being used as a spanking paddle – throws doubt on Farron’s claims.

The vicar at the centre of the sex storm, the Bloody Right Reverend Dickie Swollowmackum, told The Daily Sport:

Listen, dears. I have nooo IDEA what all the fuss is about! I thought everyone knew about Tiny Timmy being a bit of a smooth sub at the weekends? Anyways darling, it’s not like you have to hold the front page about MY sex life! Everyone knows I’m partial to a bit of bum-fun and todger-tickling. And let me tell YOU! Me and Justie Welby were only having tea with dear little Christopher Biggins last week…

In an editorial on Farron’s encounter, Christian Fundamentalist Weekly noted:

Tiny Timmy has brought absolute fucking shame on the church. Not only has the repugnant bastard been caught blatantly lying, but the weaselly little shit has tarnished all of us in the Christian community who have no issue with gays, lesbians, bisexual donkeys – whatever. If the odious little prig can’t accept that plenty of us like fun ’round the back’ – then he’s got no place in our church.