Donald Trump announces US will only accept white immigrants - The Canary 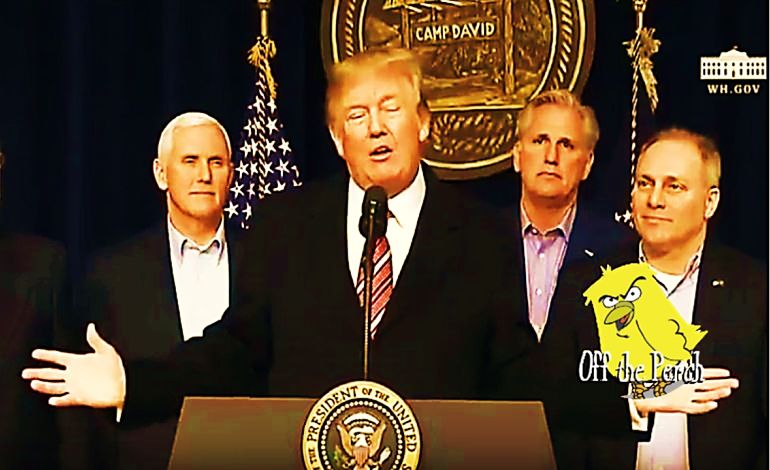 Donald Trump has announced that, moving forward, the United States will only accept white immigrants. The President announced the policy change at a press conference about alleged comments he made on immigrants from “shith*le countries”.

Speaking from Camp David, and flanked by white politicians, the President stated:

Look, I’m a reasonable guy. I am like, Mr Reasonable. You never met a guy more reasonable than me.

But listen, I tried it softly, softly. It failed. Failed. You saw my Muslim ban, right? We wanted to do this thing clean. We figured, hey, if a Muslim or a black has been raised in a majority-white country…maybe they’ll be ok, right? We’ll just keep out the lost causes.

But thanks to the SJW [Social Justice Warrior] snowflakes, that approach is over. Done. You all whined and messed it up. Now, none of them are coming in. Sad.

Mr Trump faced a series of challenging questions. But Celia Borders of Breitbart struck a more approving tone, calling on fellow journalists to “stop crying like preschoolers and get with the program”.

Policy papers seen by Off The Perch state the ban will come into force on 1 February 2018.

The new policy attracted widespread criticism from the country’s liberal politicians and pundits. MSNBC’s Rachel Saddow opened her evening show with a 108-minute denunciation of the policy, stating:

We have a f*ckwit President, a f*ckwit government, and we’re not going stand for this, f*ckwits.

Saddow was joined by New York’s Democratic Senator Serena Johnson-Willis, who told Off The Perch:

I literally cannot believe this is happening. Surely, this is a long con parody situation, right? He cannot be serious.

Concern over the policy moved beyond US borders, as leaders across the globe issued strongly-worded statements of condemnation. In a one word response issued from her official Twitter account, German Chancellor Angela Merkel wrote simply: “Arschloch” (German for “Arseh*le”).

Notably absent from the conversation, Downing Street issued no formal response. Off The Perch asked the Prime Minister to clarify the UK government’s position during a press conference about the turnip shortage, to which Mrs May replied:

This is a very complicated case. You know, a lot of ins, a lot of outs, a lot of what-have-yous.

A press officer then threw a potato sack over the prime minister’s head and tossed her into a waiting Mercedes, which sped from the scene.