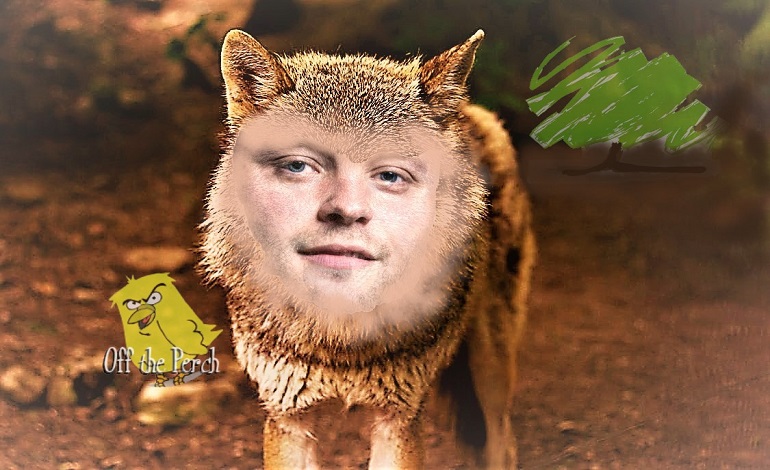 A violent wolf which absconded from parliament has been recaptured following a daring and peril-stricken chase. ‘Tis a solemn tale of fear and loathing, dear reader. And one which ends with a cautious lesson for all Conservatives…

‘Twas a bleak and sodden January night. The behemoth Storm Fionn (or Georgina) was battering the land.

He (or she) effortlessly uprooted once proud and erect trees like they were Owen Smith’s backbone.

He sent the meekly protruding spring bulbs into frantic retreat; like Gordon Brown upon meeting a ‘bigoted woman’.

He caused the timid seas to become enraged, ferociously spilling their anger onto the quivering shoreline; like Tim Farron chancing upon two men locked in an embrace.

Then suddenly, a tortured howl like a thousand Stephen Kinnocks upon the election of Jeremy Corbyn echoed through the winding corridors. MPs arose like startled, insurance-selling meerkats. The Division Bell tolled heavy; booming across the chambers and warning all mortals of the impending danger.

For the rabid and fearsome beast, known only as ‘Ben Bradley’, had escaped the bowels of his office.

Its snarling and baying struck terror in the hearts of MPs. As ’twas the beast which knew no fear. Not even the fury of the liberal press over its errant comments about unemployed vasectomies could tame it.

The creature had nurtured its voracious appetite for violence during the fabled ‘Olde Londinium Riotes’ in the year of our Lord two thousand and eleven. Now, charging through Westminster’s halls, even the fortified buttresses were too meagre to hold the beast. And it erupted onto the dimly lit streets of the City.

Suddenly, a shrill horn signalled the arrival of the one mortal who could stop the creature’s emancipation. For upon a white stallion rode into the City the fabled Priti Patel, returned from her Crusades in the Levant.

“Leave the Bradley beast to me,” she bellowed, “for ’tis only I who have known its fury!” Patel was well-placed to tame the creature, as she too had felt the fury of the liberal press for her errant comments on idle British workers.

The beast had reached the Gherkin, and had begun climbing its sheer sides. Riding down to the creature, Patel’s stallion reared up on its hinds with the force of a thousand Ken Clarkes after an evening in the Strangers’ Bar.

The beast, startled, lost its grip and came crashing down onto the unsuspecting ground. Patel deftly covered the beast in a thousand unsold copies of The Daily Mail, embalming it in the paper’s putrid leaf.

Whimpering, the beast relented. Patel, dragging it back to Tory HQ, announced to the cheering crowd of Japanese tourists:

The beast is tamed! But ’tis not over! For I will ensure that its like will never stalk our proud City again!

Taking the razor-sharp blank cheque she was gifted from the Israeli government, Patel held the beast by its throat. With the might of a wronged BuzzFeed writer, she lanced the creature’s gonads; the bulbous testes catapulting into the hemp bag of a passing hipster.

And lo! The beast quietened, immediately perusing knitting patterns upon its iPad.

With renewed vigour, the sun banished the now solemn clouds from the city’s sky. Prime Minister May, emerging cautiously from behind the strong and stable door of Number 10, told the awaiting world:

Never again will such a beast be allowed to make errant comments publicly. For upon this day, I charge that Tory MPs will only practice the dark arts of eugenics in private. Rejoice!