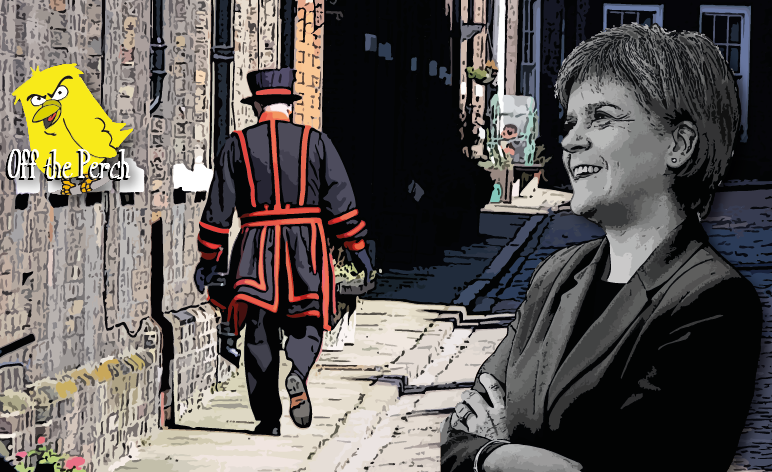 On Wednesday 24 January, several ‘news’ sources accused Nicola Sturgeon of something which apparently isn’t true. The Telegraph even used its front page to make the claim:

This is nonsense. It has been the practice to fly the Lion Rampant from government buildings on Royal occasions since 2010. There has been no change in policy or practice since then. https://t.co/Hp6H6Ytfyb

This shocking lack of rigour from a mainstream ‘news’ source led many people to question the day’s other stories. One in particular stood out. It was entitled: Rowdy Ruddy Scot Strangles Beefeater with Saltire.

In an article filled with stereotypes and slander of the worst kind, Mail Online reported:

One eye-witness saw the First Minister sneaking up behind a beefeater – a Saltire in one hand and her mouth foaming. The poor serviceman didn’t stand a chance, as the vicious, haggis-breathed witch strangled the life out of him.

Once our brave boy had copped it, the Irn-Bru harpy dragged the corpse back to her lair. Allegedly she shouted, ‘You can finance our decadent, leftist scrounging, but you’ll never take our ungratefulness!’

Sturgeon then dislocated her jaw and began to swallow the sturdy beefeater whole – an ability which is common only to snakes and the Scotch.

The SNP disputed the claims – saying that it was “more typical racism from the English establishment”.

A spokesperson from Mail Online, however, spent half an hour explaining to us why Scottish people were genetically and culturally inferior – pointing to head measurements and other dubious forms of ‘science’ as an explanation.

Buckingham Palace has also added that it’s illegal for anyone other than the Queen to hunt and eat beefeaters.