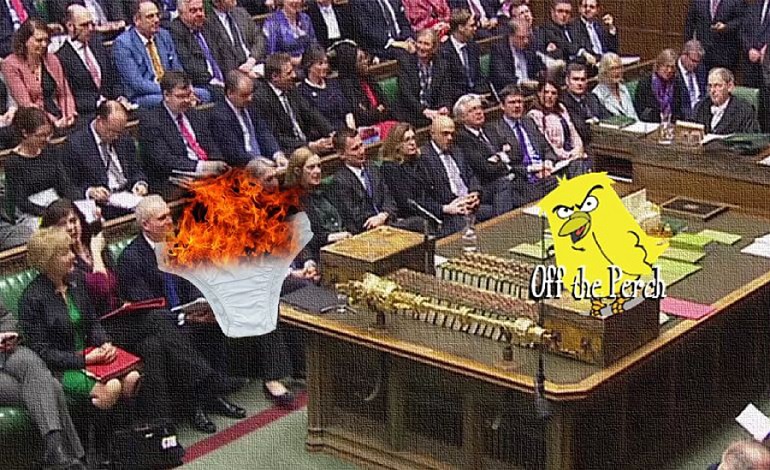 The government has announced that a “pair of underpants (on fire) and the entire Manchester City defence squad” will replace Theresa May at Prime Minister’s Questions (PMQs) as of February.

The move was organised by the Secretary of State for the Department for Universal Narnian Communications and Exchanges (DUNCE) – a large, Victorian mahogany wardrobe. It is thought to have come off the back of May’s performance at PMQs on Wednesday 24 January.

While Off The Perch gossiped about at the Star and Garter pub in Kentish Town, Jeremy Corbyn attacked May over the NHS crisis during this week’s PMQs. The angry Labour leader said:

To which May responded:

May was cut short by Boris Johnson loudly singing a rendition of L’internationale. To which Corbyn responded:

COMRADE JOHNSON!!! JOIN US TO BRING DOWN THE BOURGEOIS AND RESTORE THE PROLETARIAT TO ITS ONCE PROUD GLORY!!!

To which May responded:

Does the Leader of the Opposition forget that in Wales…

At this point, the PM was bundled out of the chamber by the Permanent Under-Secretary at the DUNCE, Aslan the Lion, and some pixies.

Jobs for the parrots

Off The Perch has learned from some bloke in the gents’ at the Star and Garter that advising May’s replacements will be:

Meanwhile, a woman Off The Perch fell over outside a kebab shop on Camden High Street said:

I heard that the NHS has a mass shortage of nurses, that waiting times were through the roof and that the Tories had been caught fiddling the A&E figures! Must be that ‘fake news’ the government are going to be cracking down on. Bloody good job too, I say! Effing Russians…

At the time of publication, it was unclear whether some flaming underpants and Manchester City’s defence would be as good at lying and deflecting as May is. Off The Perch will keep you posted…