Brexiters haven’t had much to celebrate. No one in government seems to know what they’re doing with it. The experts are still stubbornly refusing to acknowledge the obvious link between straight bananas and prosperity, and even the blue bloody passports were the wrong colour.

But the time has come to rejoice! Because a man they previously said you shouldn’t listen to has said that Brexit isn’t as dreadful as he predicted. 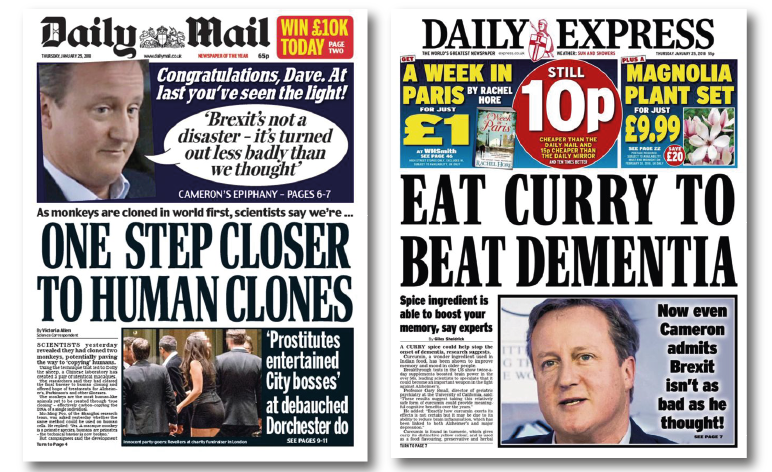 What did Cameron say?

Of course, it wouldn’t be difficult for Brexit to be less terrible than Cameron anticipated. He was after all the man who said:

I don’t want to exaggerate, but Brexit will literally lead to World War III. And by our estimates, this war will be 50 times worse than World War II. A war so bad that the movies they produce about it will make Schindler’s List look like Dude, Where’s My Car?

And even if we survive this war, Britain will be forever befouled. The pound will be so devalued that bankers will receive their bonuses in Freddos. The NHS will be so understaffed that operations will be performed by work experience kids and convicts. And our standing in the world will be so diminished that Bono will write patronising songs about us for charity.

Although obviously, things might not be quite that bad.

Saying something is less bad than you expected really is damning it with faint praise, but it’s not surprising that the tabloids have leapt on it. Brexit is going less badly than many of us anticipated, after all. Which is why we should probably change the country name from ‘Great Britain’ to ‘Not Quite as Bad as You’ve Heard but Still Only a 6/10 Britain’.