Theresa May wins Grammy for 'Broken Record of the Year' - Canary 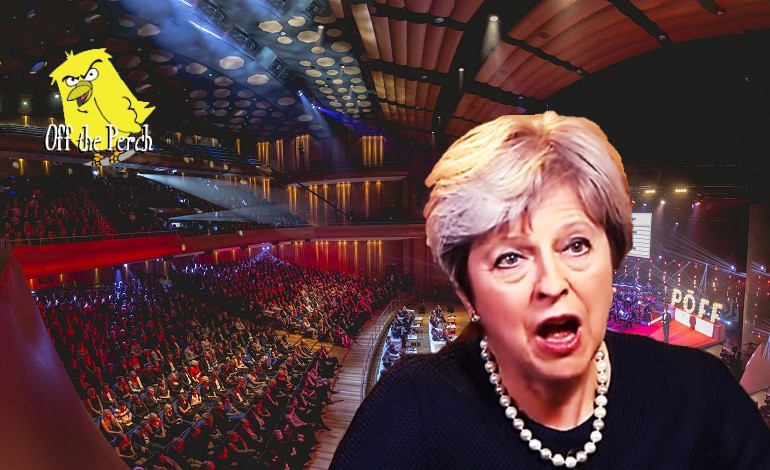 Theresa May has added another ‘gong’ to her already heaving mantelpiece of coveted awards – this time winning the prestigious Grammy for the ‘Best Broken Record of the Year’.

The PM, who flew into Madison Square Gardens on Jay-Z’s privately chartered Dyson V6 Animal, was spotted by Off The Perch’s Showbiz Editor Stefane Toppel quaffing Cristal with singers Lorde, Rihanna and Kesha in the V-V-V-IP area backstage. May reportedly also had a brief meeting with Bruno Mars to discuss his possible endorsement of the government’s forthcoming Inspiring Da Yoof: making chimney sweeping pay for the under-12s campaign.

But the PM didn’t have much time for celebrity schmoozing. Because it was soon time to collect her gong. Flanked by her G4S bodyguards, with backing dancers performing the now-standard routine from Michael Jackson’s Thriller video, all dressed as the zombie members of her Cabinet.

Amidst rapturous applause from the assembled Z-Listers and paparazzi, May’s greatest hits were played to the audience and the millions watching around the world. These included:

In her acceptance speech, May said:

I’d like to thank my husband, Philip, for his sterling support in putting the bins out on a Friday. I love his contacts at Capital Group so much, and don’t know where I’d be today without them. I’d also like to thank the British public, for repeatedly trusting the bullshit that comes out of my cake hole! Without their dim-wittery, this award would mean nothing. Thank you! And goodnight Europe!

The award will go alongside May’s other gongs: the Pride of Britain award for ‘Best Contribution to Eugenics’ and the Golden Globe for ‘Most Preposterous Performance in a Serial Horror’. And Off The Perch has exclusively learned that May’s mantelpiece has been reinforced with the motability cars of around 50,000 disabled people. Just to hold the extra gong. Seems legit to us…