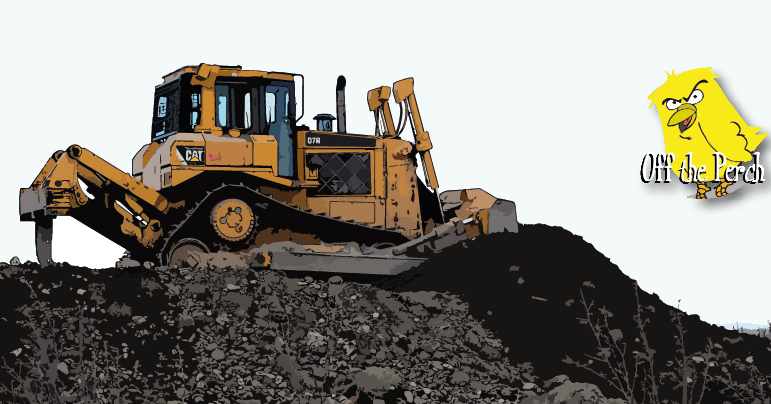 Labour council leader Claire Kober recently resigned. Some say she was hounded out by ultra-left eco-pricks. Others say that her plan to help big business gentrify local residents out of their homes was at odds with Labour’s aim of being less evil.

Another councillor who was ousted has taken matters into their own hands, however. Although it’s hard to tell what they think said plan has achieved.

Ex-councillor Bob Roberts stole a bulldozer at 11:30pm on Sunday 4 February. As he headed for town, he was heard shouting:

This will show those Stalinists who cares for the community more!

I probably shouldn’t have drunk so much champagne at that Carillion buffet!

Not long after, Roberts bulldozed several council houses and a local community centre. As people’s lives were crushed beneath his mighty progress, the former politician yelled:

Moderate politics for the win, baby! Woo! Blair did nothing wrong!

Roberts then passed out. Luckily, his fall from the bulldozer was cushioned by all the money that had been stuffed into his pockets by construction companies.

Claire Kober said she wouldn’t have been called incompetent if she were a man. The issue with these people isn’t that they’re bad at getting things done, though: it’s that they’re very efficient at doing bad things.