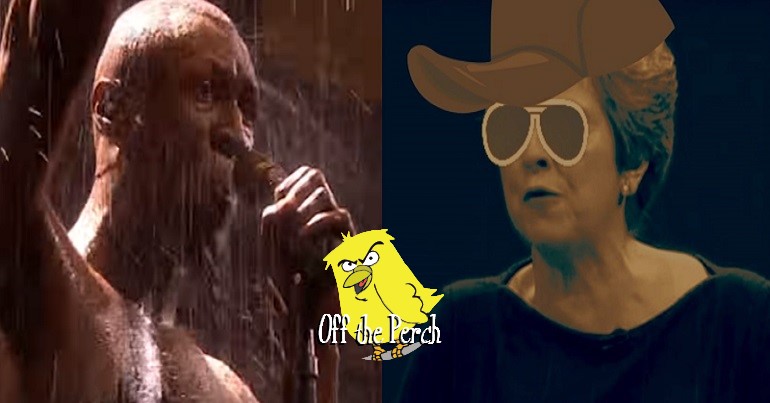 Theresa May has hit back at Stormzy and his freestyle criticism of her response to the Grenfell Tower tragedy. On Wednesday 21 February the grime artist took the PM to task at the BRIT Awards. But in a response that a Conservative insider described as “sick” (good), the PM spat back at Stormzy with her own freestyle.

At the BRITS, Stormzy asked May:

Theresa May, where’s the money for Grenfell? Just forgot about Grenfell, you criminals, and you got the cheek to call us savages, you should do some jail time, you should pay some damages, we should burn your house down and see if you can manage this.

He also told The Daily Mail to “suck his”… presumably “Mr Whippy with a double Flake in it”.

Comin’ for you, Stormzy

So in a speech outside Brixton Jam, where she was on a “youth language” fact-finding mission with new Tory fringe group ‘The Blue Wang Clan’, May threw down the gauntlet to Stormzy:

Yo, yo, yo, yo, YO! Bless up, Tory fam and much love to the Eton massive! So, that fool Stormzy was cussing this beyatch in HER endz last night. Her OWN fucking endz. Word. Aah-woo! Damn. Now dis beyatch is mad. Y’all think Stormzy got skillz? Y’all ain’t heard me spit. So Stormzy – I is coming for you. Check dis shit OUT!

In what can only be described as ‘pandemonium’, May was then engulfed by dry ice. Presented like a throwback to the East Coast, late 90s era of hip hop, the PM was suddenly surrounded by gyrating men in silver PVC hot pants, inflatable bottles of Cristal, and Boris Johnson suspended by a zip wire holding a watering can over May’s head.

Then, as Michael Gove flicked some switches on a mixing deck (still with the Cash Converters label on it), May began her D-Street Freestyle:

I heard u were asking about da money for Grenfell

Well, look here, I ain’t forgotten it u fool

You see it’s good for the economy to socially cleanse

Make way for our Russian and Chinese friends!

We want a city of investors, bankers not pimps

We don’t want the likes of u getting too rich

So, sadly for ur crew

There’s no money left, what u savages can do:

Grind that in ur rizla and go whistle

Lick on my fanny flaps and go whistle

Especially if they’re black, gay or mad as a fucking hatter

So, sadly for ur crew

There’s no money left and what you savages can do is:

Look, ur rhymes are rather nice

But u and ur grimey friends should listen to my advice

and it’s dis. Stick to grime. Leave the politics to me.

We fiddled that election fair and square. And da feds agree.

I’ve got bankers to impress

Our goal is to oppress

There’s nothing for da rest

The power is with da few. So you know what you savages can do:

There was rapturous applause from the bussed-in chinless young people dressed in tweed. Although the applause was slightly muffled by the fox leather gloves they were wearing to conceal their partially-webbed fingers.

Meanwhile, a young man who served Off The Perch in the Thornton Heath branch of McDonald’s said:

I heard that most of the Grenfell residents still haven’t been rehomed and that there’s still 296 tower blocks across the country that have the same cladding that killed all those people.

But I LOVE Puff Daddy, and Theresa May sounds just like him! I’m SO downloading that track on iTunes! It’s sick! Straight bit! Fuck Stormzy!

After her performance, May was heard muttering something about “Get me the latest youth polling. But NOT from council estates…”