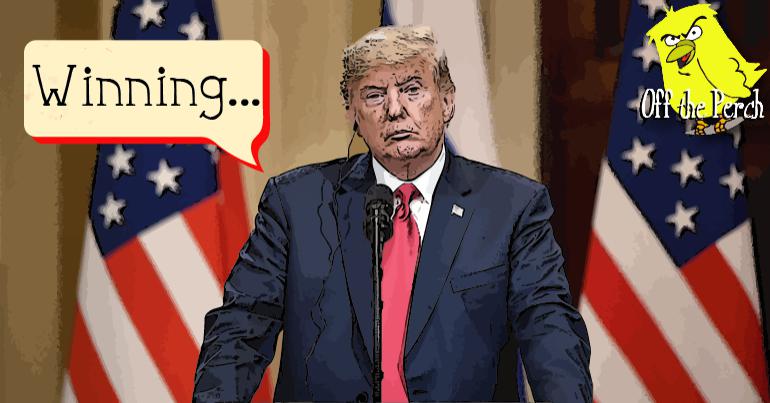 In a shocking turn of events, the American public has voted for less horror. The Democrats have taken control of the House of Representatives, which means Trump will struggle to pass anything that isn’t:

His wall with Mexico is off the cards, at least, and the investigation into his potential criminality should be free to proceed unchecked. This is bad news for the Donald, but as you’d expect:

Tremendous success tonight. Thank you to all!

Trump pointed to the fact they increased their number of senators (with fewer Senate seats up for grabs):

“There’s only been 5 times in the last 105 years that an incumbent President has won seats in the Senate in the off year election. Mr. Trump has magic about him. This guy has magic coming out of his ears. He is an astonishing vote getter & campaigner. The Republicans are………

When questioned on losing the House of Representatives, Trump tweeted:

Did we lose? People are saying we lost, but maybe some of our guys are in the back? The Fake Media said no one came to my Inauguration – turns out they took the picture before everyone arrived! For all we know, there could be another 200 of our guys getting burgers at McDonald’s.

After they managed to convince the president that hundreds of Republican representatives weren’t just hiding somewhere, he tweeted:

A lot of people are saying George Soros. Did Soros pay people to sneak across our WEAK BORDER and vote for CROOKED DEMS? I can’t say. But maybe he paid BEARS to dress like people and vote? Use your right to BEAR arms, people!

People wondered if ‘bears’ was a racist slur of some kind. It turned out it wasn’t, but coincidentally there’s a big sale on hunting rifles this week.

So at least the American gun lobby is getting the most out of him while he’s still there.

Featured image via The Kremlin (IMAGE WAS ALTERED)