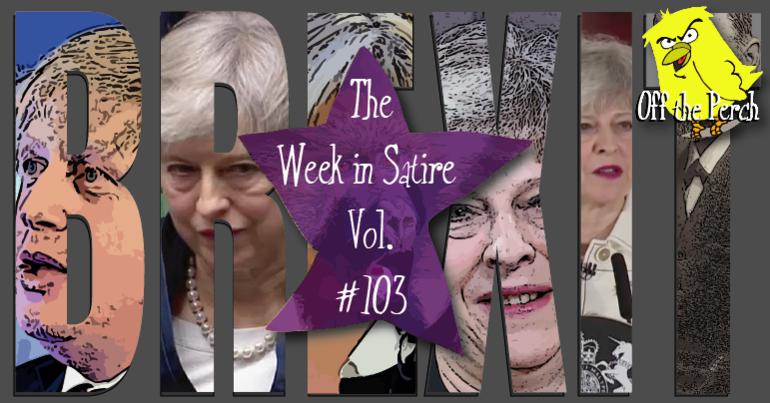 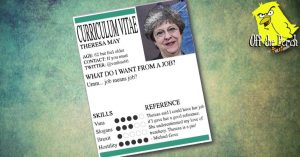 Theresa May uploads her CV to Monster.com

Having sensed which way the wind is blowing, Theresa May has uploaded her curriculum vitae to Monster.com. As you can imagine, the document makes interesting reading – seeming more like a cry for help than anything. 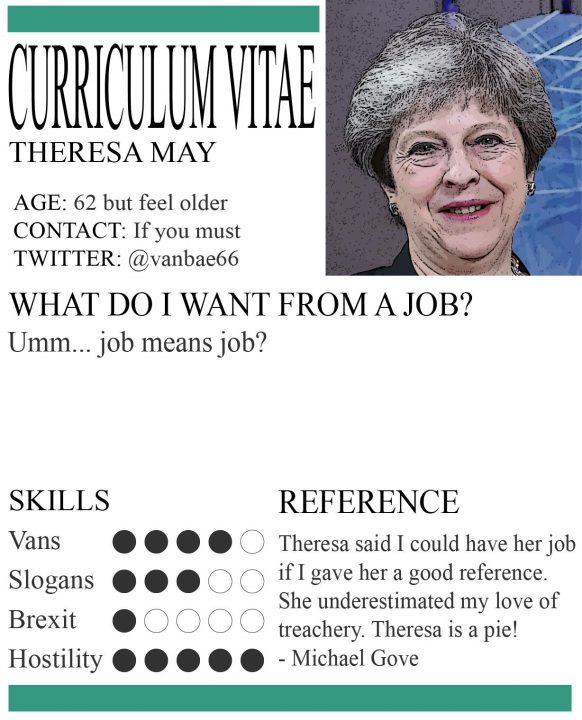 No job too small

Of course, May could use this as an opportunity to retire. She isn’t one just to give up, though. She really should be, and yet she just keeps on going regardless. 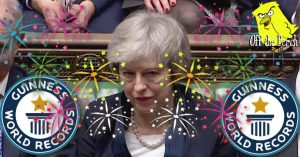 After losing record-breaking vote, PM vows to lose the next one on a pogo stick

On 15 January, Theresa May suffered the largest ever government loss in the Commons, and the biggest Tory rebellion of the modern era. So what’s left for her now?

Well, according to the woman herself:

I can’t be the best PM in history, but I can sure as heck be the worst! Let’s keep these records coming! Woo!

May admits she may not be able to lose bigger than last night, but she does have a few other ideas:

How about I lose the next vote on a pogo stick? And while I’m on the pogo stick, I’m juggling Brexit impact assessments? And as I’m juggling, I’m downing 2 litre bottles of fizzy pop?

A spokesperson from Guinness had something to say about this:

It’s really just overkill at this point. She’s already going in the next World Record Book as the worst PM in living memory. The only reason she’s not worst overall is because of what Cavendish did to those poor otters.

Not one to give up on a stupid idea, May has said she aims to replace Cavendish. David Cameron, meanwhile, has said he doesn’t regret calling the referendum – even in light of May’s plan to re-invade Iraq on a space hopper. 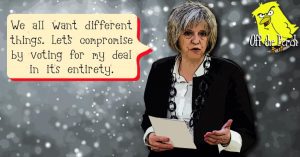 Theresa May admits to not understanding what ‘negotiate’ means

After losing the vote on her Brexit deal, Theresa May has little option left but to negotiate with other parties. The problem? She literally doesn’t know what ‘negotiate’ means.

Although, to be fair, that should have been obvious considering the past few years.

Labour refused to talk to May until she ruled out ‘no deal’. The other parties seemed less worried about that prospect (until later) but we did learn something from their attendance. Namely that May’s idea of negotiating is to repeatedly demand that people accept her deal.

“It was creepy,” Caroline Lucas said. “She just kept shouting ‘Go on! Go on! Go on!’. When we asked her what elements of her deal she’d be willing to discuss, she shouted, ‘None! I’m here to negotiate – not find a deal that’s mutually attractive to everyone!’.”

As the party leaders left, a weary Tory outside explained:

She did the same thing to us. We tried getting her a ‘word of the day’ calendar in which every word was ‘negotiate’, but she still didn’t get it.

It’s unclear if parliament will be able to negotiate a different deal. That’s not because there isn’t a better deal to be had, but because May’s impossible to work with.

There is an alternative, however.

She could somehow manage to concoct a worse deal. Considering how things have worked out so far, that’s probably the most likely outcome. 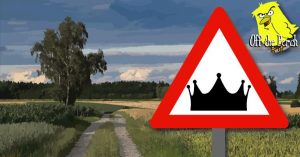 On Thursday 17 January, the 97-year-old Prince Philip had a car accident. According to the Daily Mail, the only person capable of asking him to stop driving is the Queen. As such, the rest of the country has little option but to just be wary.

The Sun seems to have it that Prince Philip was driving on the wrong side of the road… pic.twitter.com/ap5WvR1Ek3

New signs going up around the country will warn that Royals may be operating in the area. One traffic officer told us:

Ageing royals present a unique threat to drivers. They could come out of the bushes in a horse and carriage; they could be on the wrong side of the road on an armoured giraffe. In one instance, the Duke of Gammonbury dropped from the sky in a partially-decommissioned bi-plane he’d lifted from the aeronautical museum.

This time of year is particularly bad. The last of the boozy Christmas pudding is dissolving in their systems, and the cold weather means they’ll have the heating turned up to the max.

When asked what drivers could do to avoid this menace, the officer advised motorists to:

Move anywhere that Royals avoid – like the North, or the job centre.

There is, sadly, nothing we can do to stop old Royals driving. Other than – you know – just stopping them. 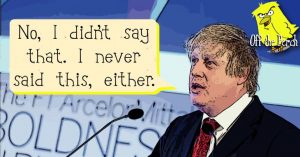 Boris Johnson had several things to say about Turkey during the European Referendum – many of which weren’t true. In a development that has shocked everyone, the man who lied about Turkey has now lied about lying about Turkey.

Speaking on the matter, Johnson said:

Speak about Turkey? I’ve never even heard of Turkey. I wasn’t even aware that turkeys are a kind of monumental chicken until earlier.

When it was pointed out that he’d actually visited Turkey, he went on:

My assistant led me to believe we’d travelled to Blackpool. I did wonder why I couldn’t understand anyone, but you know what these Northerners are like.

The Northern interviewer asked for clarification on what Northerners are like, to which Johnson replied:

I couldn’t say, because I’ve never met one. I’m not even sure which bit of the country they’re from, or, indeed, what a compass is. I’m also just remembering that I don’t speak any English, and will have to vacate this verbose symposium post-haste.

At this point, Johnson slowly backed away from the podium then ran off.

Watching this display, we couldn’t help but wonder: does Johnson have no shame?

Oh right, of course he doesn’t. He’s Boris fucking Johnson – the man with all the decency of an ivory arse-scratcher. 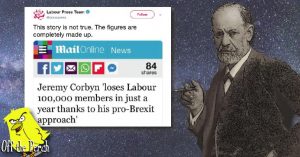 News outlets estimate Labour has lost between 0 and 600,000 members

According to some reports, Labour has lost 100,000 members:

This story is not true. The figures are completely made up. pic.twitter.com/fdsl6CWXHn 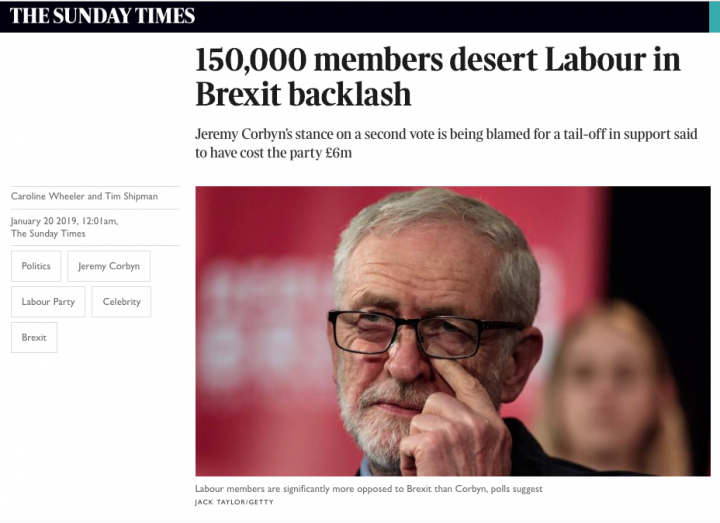 Or possibly they just made it all up?

The suggestion that we have lost large numbers of members in one of today’s papers is totally untrue. As a member of Labours NEC I can say this with absolute certainty. In fact, at the present time we are still growing each week, and each month.

In which case, I guess they’ll have to keep guessing until they get it right.

Off the Perch has heard from a media insider. According to an unsubstantiated report they gave us, several outlets have agreed to guess the figure until one of them nails it – with the winner getting to look like they did actual journalism.

The Mail stuck with its 100,000 figure, and the Times with 150,000. The Express predicted that every Labour member had left – even the really big ones like Jeremy Corbyn and Charlotte Church.

The Sun took the opposite extreme, and suggested only a handful of members had gone – namely that handful of annoying minor celebrities who make so much noise on Twitter.

The Telegraph took a punt and suggested Labour’s membership has actually increased. The party is pushing for another election, after all. We know that Brits love massive votes; we wouldn’t have had four in the last five years otherwise, right?

Only time will tell what’s happened with Labour’s members. Presumably they’ll just release the figures at the normal time, rather than – you know – when the tabloids throw some numbers out to see what sticks.