Right-wing youth movement not what it seems to be - Canary 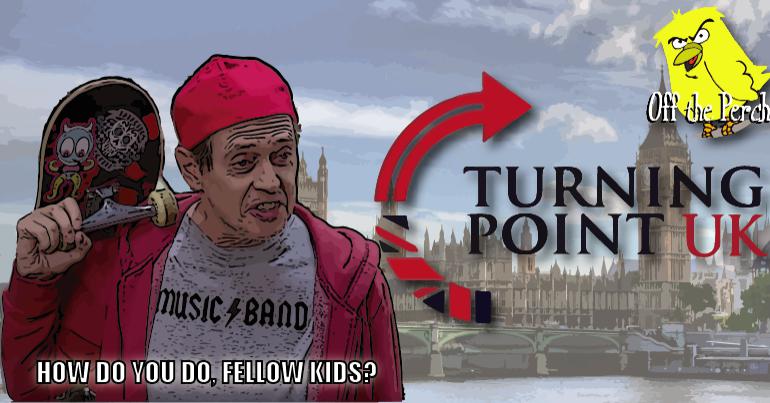 Turning Point is a right-wing youth movement. It aims to prove that young people love the economic system which will see them have less wealth and opportunity than their parents.

But… err… do they actually love it?

I'm still pretty sure that Turning Point UK will be a hilarious and embarrassing failure but: in the US, the organisation runs a Professor Watchlist which intimidates academics with feminist, anti-racist or left-wing views, so I'm just THRILLED that it has Tory party support. https://t.co/fuoFgsCGYR

An Off The Perch investigation revealed something shocking.

One of our journalists visited the Turning Point UK offices undercover. We expected to meet a group of affluent, young rich people with a passion for holding the rest of their generation back. All was not as it seems, however.

The man in question wore shorts and had a backwards baseball cap on.

“Excuse me, but aren’t you Jacob Rees-Mogg of the Conservative Party?” our journalist asked.

“Umm…” our reporter said – not buying it.

I see that new hip young right wing group, Turning Point, have got Jacob Rees-Mogg backing them. Because nothing says "youth vote" quite like double breasted morning suits, being tucked in by Nanny and wishing for the good old days of Castlereagh

“Let me put this in terms you’ll find more on fleek,” Rees-Mogg continued. “Socialism is like the bad guy in the Harry Potter books, and conservatism is like the good guy – whatever his name was. I think it was Ron Jeremy or something.”

He then attempted to do a kick flip on his skateboard – a move which saw him shatter every bone in his leg.

“I told you… that would be… hip…” he moaned, as the paramedics carried him away.

Dad jokes aside, Turning Point UK is offering young people something that no one else is. No one except the government and its corporate backers, obviously.