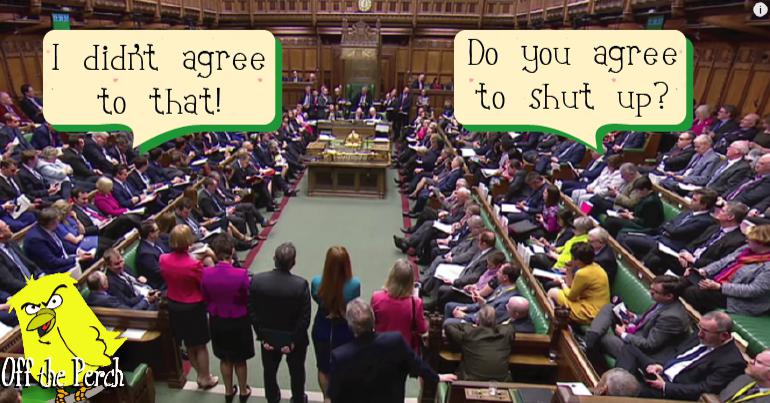 On 27 March, MPs held votes on several different Brexit options. The result was that every single option got voted down. And this means…

What does it mean?

Does anyone even know anymore?

Are we even allowed to admit that?

Regardless of what is or isn’t happening – at least our MPs have come to a consensus. It’s just a shame said ‘consensus’ is that they fundamentally disagree on everything.

Should she stay or should she go now?

Theresa May’s deal is both unpopular and terrible. She tried encouraging people to vote for it on the understanding that she’d quit immediately after. This is a bit like an amateur boxer telling Tyson Fury they’ll take a dive if they also get to keep the prize money.

We’re still not prepared for an orderly Brexit, and we voted for that three years ago.

Others put their vote towards some sort of close economic relationship with the EU. Others didn’t because:

I’M SORRY BUT I’M NOT READING UP ABOUT HOW CUSTOMS ARRANGEMENTS WORK – I DIDN’T VOTE FOR BREXIT TO DO A LOAD OF READING!

One group of MPs voted for a new referendum. These politicians were scuppered by other MPs who wanted to represent their constituents’ votes.

It’s easy to say ‘you should ignore your constituents if what you’re delivering is harmful to them’. The problem is that MPs vote for things that are harmful to their constituents all the time. That isn’t a good thing, obviously. But expecting career politicians to suddenly stop looking out for their own interests mid-career is optimistic to say the least.

So what happens now?