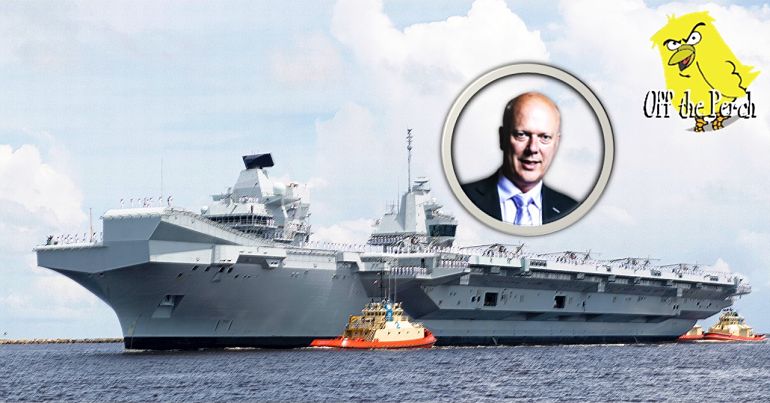 Chris ‘Failing’ Grayling is always one to move fast. Just not necessarily in the right direction or without bumping into things.

And now the catlike transport bigwig seems set to pull off his biggest pounce yet. Hearing that the UK’s flagship aircraft carrier could be up for grabs, Grayling has reportedly swooped in and nabbed it to boost cross-channel freight capacity.

HMS Queen Elizabeth is the navy’s posh new aircraft carrier. When it eventually gets all the planes it’s supposed to have, it’ll be a one stop shop for apocalyptic adventurism. Big Lizzy’s combined killing capacity will be able to ‘project British influence’ even more effectively, the MoD claims, than the current ‘soft power’ approach of sending Ed Sheeran on world tours.

Given that the skipper of this behemoth basically has charge of a floating death city that he can point at countries he doesn’t like, it’s a surprise to learn that he allegedly prefers tootling around for fun in his MOD-provided Ford Galaxy. Normally naval captains have to do something appalling like crash into Portsmouth or proposition a royal to lose their posts. But, although it sounds like a melodrama from a regional sales office, apparently company car misuse is a keelhauling offence.

So, enter Grayling. Blissfully unaware that the government he keeps shooting in the foot is now full of holes, he’s determined to keep making plans. And ever since his ferry deal capsized, he’s been determined to put things right. Sources say he’s particularly excited that the carrier, due to its lack of planes, will have lots of space for goods.

Ken Chisel, from the Institute of Criticism, suggested this might be one of Grayling’s better efforts:

It looks as if Grayling has learned from the rubber dinghy debacle. At least this time he’s getting a proper boat. There are still some outstanding issues, though, not least the need to enlarge Ramsgate harbour. Also, at some point the navy is probably going to want to use the ship properly, to patrol the Falklands or irritate China. Or just to lend it to the US for a bit. So actually, thinking about it, this idea is about as good as all of Grayling’s others.