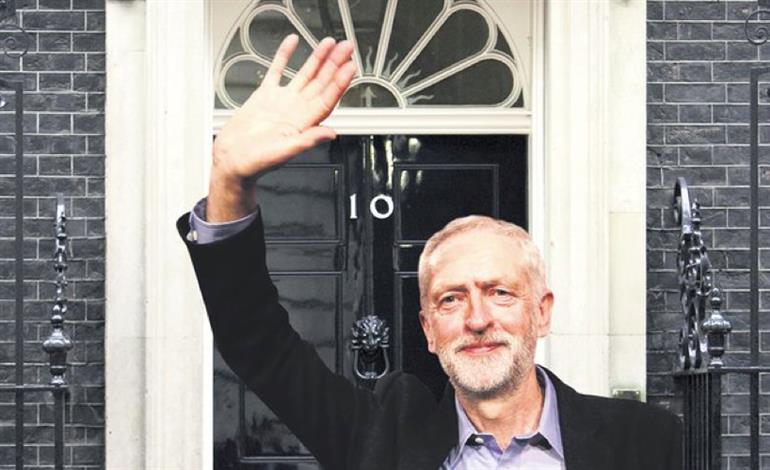 Media commentators have a new pet name for anyone to the political left of former Prime Minister Tony Blair. And it’s ‘alt-left’. Self-described liberal commentators are essentially arguing that people who want to share more are comparable to neo-Nazis.

The origins of this pet name

I was first made aware of this noxious new name when I was called it during a public debate. Mail columnist Dan Hodges flung it at me casually as he decried the rise of the left and right as equally terrifying prospects. But after this first baffling encounter, I noticed it everywhere.

The term originates in the US, with the fascist movement that calls itself the alt-right. As The Canary previously reported, these are people who have actually used the Nazi salute.

It’s been promoted by media outlets sympathetic to this neo-Nazi movement, such as The Daily Caller, Breitbart and Fox News. From there, it made its way into the common terms of abuse thrown by the movement’s supporters on social media.

Gee, Bill. That kind of thought is anti-PC. The alt-left thought police will get you. (Note sarcasm) hmmmmm. On second thought, not far off https://t.co/OgL3pEeG8U

In the fine tradition of the Alt-Left, Slate sinks to a new low–if that is possible! Slate – a true irredeemable deplorable!

But it spread into liberal America too, used against those who voted for Bernie Sanders or Green candidate Jill Stein. The term even made it into Vanity Fair.

And now, neoliberals in the UK have hijacked the term to attack the traditional left here.

What crimes can see you labelled ‘alt-left’? Well, such extremist acts as showing support for Labour leader Jeremy Corbyn, marching to oppose NHS cuts, or writing about the impacts of welfare cuts and austerity.

There is chest-deep irony in a group of people comparing others to the ‘alt-right’ while so gleefully adopting their talking points.

Everything that is ridiculous about that pet name

Of course, the term is blatantly absurd. There is no equivalence between the traditional left and the so-called ‘alt-right’. The former is a legitimate and mainstream world view that promotes social justice, equality, and progressive values. The latter is the opposite. Yet some liberal commentators argue that these are two sides of the same coin.

This makes as much sense as arguing that an arsonist and a firefighter are two sides of the same coin. One is committed to starting a fire, the other to putting it out. These commentators would argue that the only moderate way forward would be a compromise. Let the arsonist burn down half the building. Your half. And when the firefighter pushes them out of the way to fight the flames regardless, the commentators would scream: “Oh my god! It’s another one of those alt-arsonists!”

There's no fucking alt-left. There's the actual left & then there are liberals who pretend to be left. Stop this nonsense

Neoliberals hate being called 'neoliberal,' a *real* word describing someone promoting an ideology, yet circulate the bogus term 'alt-left' pic.twitter.com/ZAaPRV81qT

The trouble with liberals

But from the vantage point of modern liberalism, the arsonist and the firefighter are comparable.

For at least the past three decades (perhaps far longer), the liberal project in politics and the media has become the preserve of privilege. A largely white, largely male, largely wealthy media and political class has confused liberalism with centrism.

Liberalism, if it is to mean anything, is radical. It seeks constantly to defy and dismantle unjust attitudes, policies and practices which restrict freedoms vital to full participation in private and public life.

Centrism is a politics of relativism – it looks to its left and its right, considers both sides equivalent and extreme, and pitches its tent between the two.

This is why, no matter how far to the right that ‘centre’ moves, the centrists will argue that anyone to the left is just as terrifying as anyone to the right. They see extremes when there are merely opposites. Contrary to their view, there are some values which are absolute. And advocating for them against a resurgent right is not extremism. It is humanity in action.