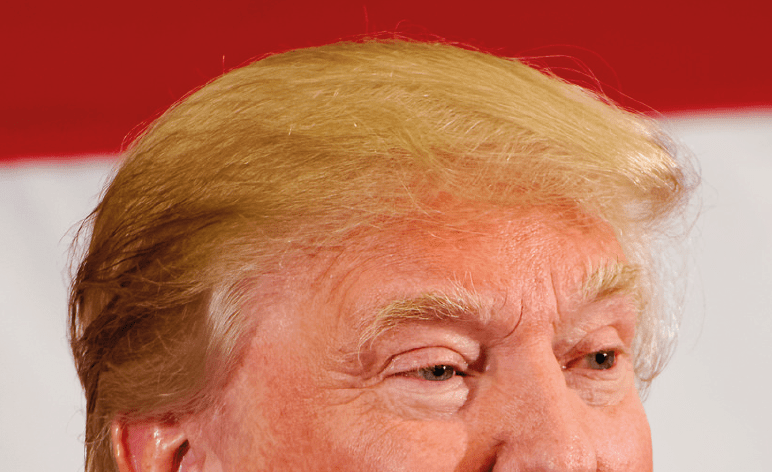 The first time I ever saw Donald Trump was when he entered the race to become the Republican Party’s Presidential nominee. I was aware of him before then – aware of his reputation. I knew he was a ruthless businessman who wasn’t afraid to step on people to get what he wanted. And as such, an image of him had formed in my mind. An image which did not correlate with how he looked in real life. (i.e. like an angry, old used-car salesman whose pound shop wig had outlasted all seven of his marriages).

Visually, his hair was one of the strangest things I’d ever seen. A combination of hideousness and vanity that looked less like a haircut and more like something a character in a fairy tale would be cursed with. And yet now, a mere two years later, I never think about Trump’s hair at all. I see him skulking about in the White House; I see him pretending to understand what political and military advisors are telling him; I see him shaking hands with world leaders he threw playground insults at mere hours earlier, and it’s just normal.

Trump’s hair is nowhere near the worst thing about him. But it is the most obvious. And if we can become normalised to that, what can’t we get used to?

Part of Farage’s success with UKIP was in pretending he didn’t hold the horrible beliefs that many in his party quite obviously held. Although many UKIP politicians still couldn’t manage to veil their worst urges, Farage did make sure anyone caught out was suspended. Doing so did nothing to assure people who thought UKIP was a hotbed of arseholes. But it did at least give its supporters plausible deniability.

Increasingly though, Farage is coming out of his horrible, fetid shell like the cold-blooded reptile he is. In the past year, he has openly supported Tump, a man with numerous allegations of sexual assault against him – a man whose ‘America first’ rhetoric is already translating as ‘Britain second‘. He has received a standing ovation at far-right German rally which he attended as the guest of the granddaughter of Hitler’s finance minister. And most recently he has said Americans should be more worried about the Jewish lobby than Russia.

If Farage had done any of these things at the beginning of his career, he would have remained a fringe bigot like Paul Golding or Tommy Robinson. But by slowly unfurling himself like one of those rare stink-flowers, Farage has been able to maintain his position in the media and political establishment. And suddenly attending far-right rallies and speaking out against Jewish people is once more within the sphere of what’s culturally normal.

In the past seven years, it’s become wholly normalised to expect government ministers to not just be incompetent but actively at odds with the position they hold. We’ve had:

As such, it’s now seen as something quite spectacular that Michael Gove appears to be taking his role as Environment Secretary seriously. Despite the fact that we’re currently going through what some scientists are referring to as an ‘extinction event‘. Despite the fact that our failure to protect the planet – i.e. that thing we all live in – would be both the worst and final mistake we ever made.

In the UK though, the idea that ministers should be working against their brief is the norm.

Normalisation is one of the most dangerous phenomena there is. It allows people with ill-intentions and a modicum of self-control to elevate themselves to positions of influence. And it’s why we have politicians complaining about bendy bananas one day and warning about malign Jewish influence the next.

You should remember this every time you see President Trump’s hair.

Because if we can get used to that, imagine what else we’re ignoring.