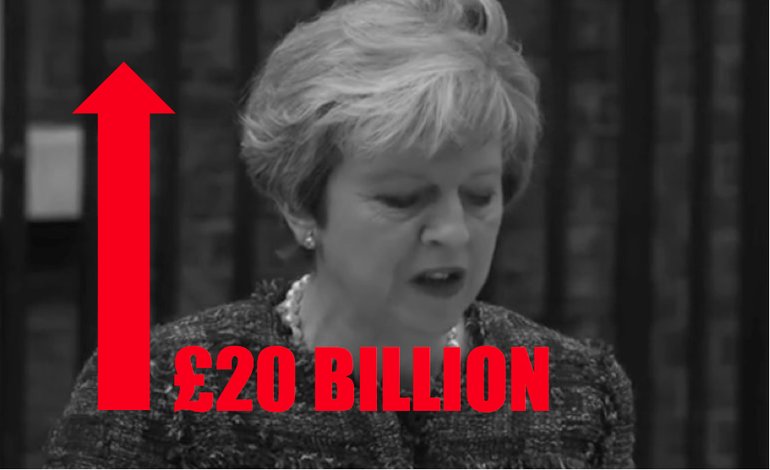 Theresa May promised “strong and stable” government in the 2017 general election campaign. But the economic record of her government so far is anything but, and things are now £20bn worse.

This is all about broken promises. Three successive Conservative governments have promised they would erase the budget deficit within a single parliament. The Cameron-led government promised it in 2010, and failed. During the 2015 general election, David Cameron promised it again, and he failed… again. Then, the night before Philip Hammond’s November 2017 budget, the latest figures showed the deficit was actually widening rather than closing. Now, the Conservatives say the deficit won’t be gone until midway through the next decade. 15 years and a decimated welfare state later, it won’t have been worth it.

And while the Conservatives have underperformed badly on the deficit, it’s debt where the real car crash is happening. In 2009/10, the final year of the Gordon Brown government and after the financial crisis, UK government debt stood at £1tn [pdf, p1], or 69.9% of GDP. By March last year, it had almost doubled to £1.7tn, or 86.8% of GDP. Current forecasts predict that, by the financial year 2022/3, the national debt will stand at £1.9tn [pdf, p13]. This is the reality facing the UK economy if May and the Conservatives are allowed to complete their job.

These broken promises and shattered economy are the result of ideological austerity. So far, austerity has delivered a fall in real wages, the loss of job security, public services buckling under the pressure of funding cuts, and astronomic rises in homelessness and food bank use. It has manifestly failed to deliver an end to the deficit, or a reduction in the national debt.

During the 2017 general election, Conservatives repeatedly told voters there was “no magic money tree” to invest in our economy. But soon after that, Theresa May’s magic money tree shed £1bn to convince Northern Ireland’s DUP to prop up her minority government. As we’ve seen above, it also shook out £20bn more public sector net borrowing. And now, the government faces “unknown” insolvency costs after the collapse of government contractor Carillion. The government had awarded more than £2bn in contracts to the firm in the previous six months, despite it issuing three profit warnings.

And there is no grand vision behind this spending. There is no rebuild or transformation underway. The most innovative thing happening right now is the HS2 high speed rail network, and that’s pure calamity.

For £48.6bn a year (in increased taxes on those who can afford to pay), Labour could have rebalanced the economy. A fully public NHS, a National Education Service to keep us learning from cradle to grave, the end of the public sector pay cap, the scrapping of costly PFI contracts bankrupting our public infrastructure projects, and more. Borrowing to invest is always a gamble, this is true. But borrowing to fiddle your economic growth figures while cutting your fiscal lifelines is economic suicide. And since 2010, the latter has been our long-term economic plan. The time for change is now. Because frankly, there might not be much left to save if this folly continues.

– The New Economics Foundation is a people-powered think tank where you can learn about economics in a fresh, accessible way.