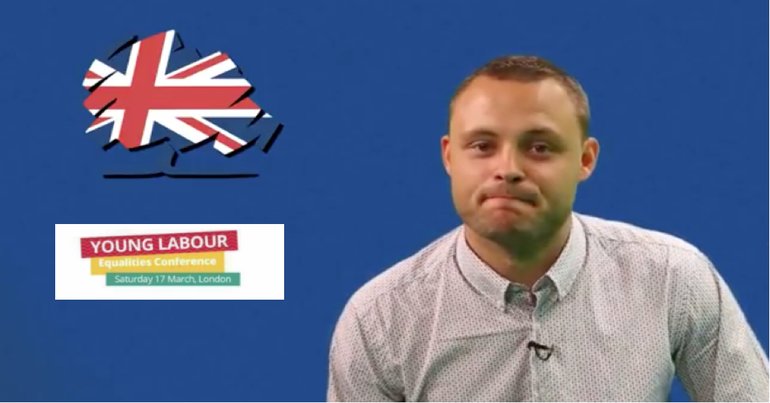 Conservative MP and Vice Chair for Youth Ben Bradley has launched a stunning attack on the Young Labour Equalities Conference. And his intervention has gone down like a cup of cold sick for anyone with half a brain.

The Tory Vice Chair for Youth

In the 2017 general election, the Labour Party beat the Conservatives in every age group under 50. The Conservative Party responded by making Ben Bradley its Vice Chair for Youth. This inadequate move was made worse by the fact that Bradley is uniquely unfit for the job, as his recent behaviour confirms.

On 11 February, Bradley claimed Young Labour was “saying no straight white men allowed” at its Equalities Conference on 17 March.

Senior Conservatives and their pet journalists at The Sun, The Evening Standard, The Telegraph and elsewhere got right behind him, shrieking feigned indignation.

The purpose of the conference is to elect four Young Labour liberation officers. Their focus would be to self-organise and promote issues and opportunities for specific groups of voters: BAME (Black, Asian and Minority Ethnic), disabled, LGBT and women. Why? Because in case you’ve not looked at parliament lately, those are the groups that are most under-represented in politics.

Do straight, white men have issues? Of course.

Are they real and urgent? Yes.

Is one of them under-representation in politics? No.

I mean, it would be like Bradley attempting to attend the Conservative Women’s Organisation. Though strangely, he’s not busy tweeting about that.

Well it appears the tories agree with Labour on this, so I'm confused… pic.twitter.com/JREtf4iWv5

While we’re at it, I might rather like to attend a ‘Labour veterans conference’. But having never served in the armed forces, I appreciate it’s not my party.

Are you also angry that only veterans can join the veterans association? Or that only dogs can enter Crufts? Should BWAFU be sued for not allowing steel workers to join?

Most people seemed to get that point. But sadly, Bradley remains a planet away.

A planet away from the point

And this is exactly why the Tories are dead to most people under 50. Because this entitled attitude belongs *in* the 1950s.

Bradley should be fucking ecstatic that he doesn’t have to attend a conference about being under-represented in parliament. Because we would be. We’d all rather live in a world where our ethnicity, gender identity, sexuality or disability didn’t count against us. But we don’t live in that world. And until we do, we need to keep banging at the door.

I wouldn’t expect Ben Bradley to understand this. Because Ben Bradley doesn’t understand much outside his own bubble. In January, he was forced to apologise for a 2012 blogpost in which he called for unemployed people to have vasectomies. He had claimed it was the only way to avoid Britain “drowning in a vast sea of unemployed wasters that we pay to keep!” And three days after police killed Mark Duggan (triggering the 2011 London riots), he wrote: “For once I think police brutality should be encouraged!”

Yet the Conservative Party still considers him the guy to re-energise the Tory youth vote; as if the mere fact of being aged 28 makes Bradley equipped for the task. But hey, it’s easier than admitting to having abandoned the youth vote; which is what the party has actually done.

Since 2010, the Tories have done nothing but make life harder for young people. By trebling tuition fees, they gifted the average university student a £50,000 debt burden to carry into their adult life. By cutting financial support to young people from poor backgrounds, they pushed them out of the education system that could have improved their life chances. At every turn, the party found new and ingenious ways to fuck young people over. And by 2015, youth unemployment reached its highest point for 20 years. Worse, the Resolution Foundation reports that young people today will likely be poorer than their parents at every stage of their lives.

Ben Bradley needs to talk less, and listen more. And the same goes for his party. Because both are morally and intellectually bankrupt. Out of ideas, out of energy, out of touch. And frankly, the sooner they are out of office, the better for Britain. Because we need ideas, energy and connection – and we need them now.